Cathedral of the Immaculate Conception (Tyler, Texas) facts for kids

The Cathedral of the Immaculate Conception is a Roman Catholic cathedral located in Tyler, Texas, United States. It is the seat and principal church of the Roman Catholic Diocese of Tyler. 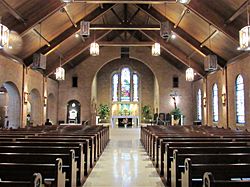 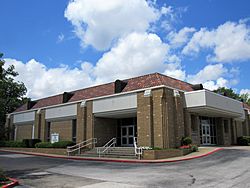 Tyler started to grow as the railroad came to town in the 1870s. Priests from Nacogdoches and Palestine came to Tyler to celebrate Mass and attend to the pastoral needs of Catholics. Immaculate Conception Church was established in 1878. A wood frame church was built at the corner of West Locust Street and North College Avenue two years later. By the 1910s, it was evident that the parish needed a larger church, however, the present church would not be built until after the Rev. Sebastian A. Samperi became pastor in 1927. The congregation purchased property at Front Street and South Broadway and the new church was dedicated until March 17, 1935. The parish renovated and redecorated the church in 1949 and again in 1978. It added parish offices, a library and a large meeting room in 1984 and two years later, named the church basement facility for Father Samperi.

As the population of Tyler and Smith County grew, the Cathedral parish expand as well. In the early 1990s, the parish added the Cathedral Center, featuring meeting and banquet rooms for parish activities. In 1994, with thousands attending Masses every weekend at the Cathedral, there became a need for an additional space. The parish created St. Paul’s Chapel in the Chancery Office as a temporary facility while it planned a permanent location. The patience of the parishioners was rewarded on December 8, 2011, when Bishop Alvaro Corrada dedicated the 700-seat Chapel of Sts. Peter & Paul on the campus of Bishop Gorman Regional Catholic High School.

The parish includes St. Gregory Cathedral School which was opened in 1946. The school has twice been named a U.S. Department of Education Blue Ribbon School,

All content from Kiddle encyclopedia articles (including the article images and facts) can be freely used under Attribution-ShareAlike license, unless stated otherwise. Cite this article:
Cathedral of the Immaculate Conception (Tyler, Texas) Facts for Kids. Kiddle Encyclopedia.