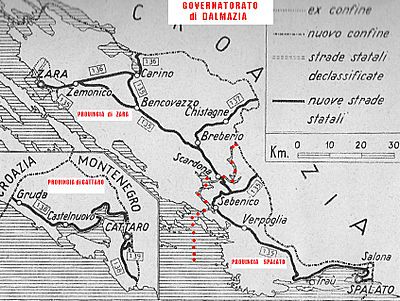 Map of Governorate of Dalmatia, with the "Provincia italiana di Cattaro"

The Cattaro (Italian province), called in Italian Provincia italiana di Cattaro was an administrative section of the Governorate of Dalmatia, created during World War II by the Kingdom of Italy with Regio Decreto Legge of May 18, 1941.

The newly created province had approximately the borders of the Albania veneta, that was part of the Republic of Venice until 1797 in southern Dalmatia.

In the province of Cattaro there were the cities of Cattaro, Perasto, Risan|, Teodo and Castelnuovo di Cattaro. The province had a small territory around the "Bocche di Cattaro" (Boka Kotorska) of 547 km² and nearly 39,800 inhabitants. The island of Saseno in Albania was annexed to the province, after separating it from the province of Zara (since 1920 this little island was part of Italy).

The population was mostly Slav, but there were nearly 3,000 autochthonous Italians, descendants from the Dalmatian Italians since Roman times: they were concentrated in the areas of Cattaro and Perasto. 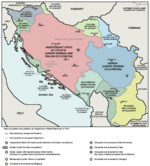 Italian General Vittorio Ambrosio conquered in a few days all the Dalmatian coast of Yugoslavia, and occupied the area around Cattaro (called "Kotor" since 1919) in April 1941.

The new Italian province of Cattaro was created by order of Italian leader Benito Mussolini the next month, with the "May 19 Treaty between Italy and Croatia". Francesco Scassellati Sforzolini was named "Prefect" of the Cattaro province, serving from June 1941 to June 1943.

The governorship of the Cattaro province (and all the Governorate of Dalmatia) was held by Giuseppe Bastianini until January 1943 when he was recalled to Italy to join the cabinet; his place as governor was taken by Francesco Giunta.

In summer 1941 the Italian government started a policy of Italianization in all the Governorate of Dalmatia. New Italian schools were opened in the "Bocche di Cattaro" (now called Boka Kotorska). Administrative personnel from Italy moved to Cattaro city (nearly 6,700 Dalmatian Italians took refuge in Italy after the creation of Jugoslavia in 1919, and many of them were offered work if they returned to settle with their families in the Governorate of Dalmatia). Bastianini started needed public works, building hospitals, sewage and roads in the area.

Some 500 Jews took refuge in the Cattaro province, after escaping the Ustasha and Nazi German persecution in their areas of former Jugoslavia.

The province was spared the bloody guerrilla, that happened in the rest of Italian-occupied Montenegro, until mid-September 1943 when Germans took control of the area and the Italian province of Cattaro disappeared. The Italian Division "Emilia" of the "XIV° Corpo d'Armata" fought the German occupation of the Province of Cattaro, having 597 deaths e 963 wounded soldiers, from September 9 until September 16, 1943.

"Comuni" of the Province of Cattaro

These were 15 "comuni" (municipalities) in the Italian Province of Cattaro. The first name is in Italian, the second in Montenegrin-Serbian and the third in Croatian:

All content from Kiddle encyclopedia articles (including the article images and facts) can be freely used under Attribution-ShareAlike license, unless stated otherwise. Cite this article:
Cattaro (Italian province) Facts for Kids. Kiddle Encyclopedia.