Venetian Map of 1680 showing Kotor (called Cattaro until 1797) and the surrounding bay, inside the "Albania veneta"

Albania Veneta (English: Venetian Albania) was the name for the possessions of the Republic of Venice in southern Dalmatia from 1420 to 1797.

It originally covered the coastal area of what is now northern Albania and the coast of Montenegro, but the Albanian and southern Montenegrin parts were lost to the Ottomans in 1571.

The word "Veneta" in Albania Veneta was used to differentiate the area from the Ottoman Albania (called Albania Ottomana in those centuries), an area stretching from Kosovo to southern Albania.

These Venetian possessions stretched from the southern borders of the "Republic of Ragusa" (modern-day Dubrovnik) to Durazzo (Durrës) in coastal Albania. The Venetian territories never reached more than 20 km from the Adriatic Sea. After 1573 the southern limit was moved to the village of Confin (Kufin) near Budua (Budva), because of the Ottoman conquests of Antivari (Bar), and Dulcigno (Ulcinj) in the Balkans.

Venice started to take control of the small southern Dalmatian villages around the 10th century, assimilating quickly the neolatin "Dalmatian language" of the coastal areas into the Venetian language. But only in the 14th century was the Republic of Venice able to create a territorial continuity around the Bay of Kotor. These Venetian dominions around Cattaro (Kotor) lasted from 1420 to 1797 and were called Albania Veneta, a historical province of the Republic of Venice. 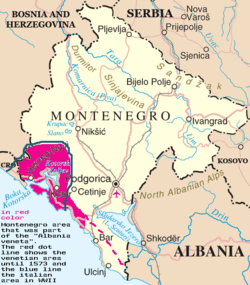 The "Albania Veneta" areas of Montenegro

When the Turks started to conquer the Balkans in 15th century, many Christian Slavs took refuge inside Venetian Dalmatia and so even the Albania Veneta started to have a huge Serb and Albanian population. By the end of 17th century the Romance speaking population of the historical Albania Veneta was already a minority, according to Oscar Randi in his book ''Dalmazia etnica, incontri e fusioni.

After the Napoleonic armies conquered and put an end to the Republic of Venice in 1797, the area of the Albania veneta changed control many times: in 1805 was annexed to the Napoleonic "Kingdom of Italy", then in 1809 was part of French "Illyrian Provinces" and finally in 1815 was put under Habsburg control in the Dalmatia of the Austrian Empire.

Under the Habsburg domination, Albania Veneta was part of "Austrian Dalmatia" and in 1878 (at the "Congress of Berlin") another 40 km² around Sutomore were added to this territory.

The borders of the former Venetian province of Albania Veneta changed again in 1918, when was created the Kingdom of Yugoslavia, but were reinstated from 1941 to 1943 during World War II, when Mussolini annexed the territories around Cattaro to the Kingdom of Italy. The area was part of the Italian "Governatorato di Dalmazia" and was called Provincia di Cattaro.

After World War II any political entity related to the historical presence of Venice in southern Dalmatia ceased to exist and the area was definitely incorporated into Yugoslavia. The old Albania Veneta is currently a coastal region of the newly independent Montenegro.

History of the Venetian speaking population of Albania Veneta

According to the Dalmatian historian Luigi Paulucci (in his book "Le Bocche di Cattaro nel 1810") the population of the Albania Veneta, during the centuries of the Republic of Venice, was mainly Venetian speaking (approximately 66%) in the urban areas (Cattaro, Perasto, Budua, ecc..) around the "Bocche di Cattaro" (Bay of Kotor).

But in the inland areas more than half of the population was Serbo-Croatian speaking, after the first years of the eighteenth century. Paulucci wrote even that near the border with Albania there were big communities of Albanian speaking people: Dulcigno (Ulcinj) was half Albanian, one quarter Venetian and one quarter Slavic-speaking.

During the French rule of the area of Cattaro the schools were in Italian, when the former Albania Veneta was part of the Napoleonic "Kingdom of Italy". 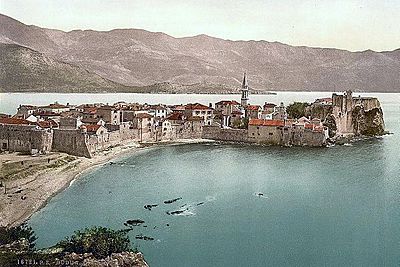 The Venetian walls of Budua (Budva) in a 1900 postcard

The Slovenian Marko Trogrli in his essay "The French school system in French Dalmatia" wrote that "Vincenzo Dandolo, the French governor of Dalmatia as well as Bartolomeo Benincasa, an official from the local (Dalmatian) Education Department, published in May 1807 a plan for the province's public education (Il piano generale della pubblica istruzione in Dalmazia), which had to be consistent with the education system throughout the Napoleonic Kingdom of Italy....Instruction was to be in Italian".

During the nineteenth century, according to the historian Scaglioni Marzio, the wars of independence of Italy from the Austro-Hungarian empire created a situation of harassment against the Italian (or Venetian speaking) communities in the Austrian southern Dalmatia.

The result was that in 1880 there were in Cattaro, according to the Austrian census, only 930 ethnic Italians (or only 32% of a total population of 2910 people).

Furthermore, in the Austrian census of 1910, the Italians were reduced to only 13.6% in that city, according to Diego De Castro in his book Dalmazia, popolazione e composizione etnica. Cenno storico sul rapporto etnico tra Italiani e Slavi nella Dalmazia.

There are currently 500 Italian speakers in Montenegro, mainly in the area of Cattaro (Kotor) and Perasto (Perast), who constitute the "Comunitá Nazionale Italiana del Montenegro".

The "disappearance" of the Italian speaking populations in Dalmatia was nearly complete after World War II. The linguist Matteo Bartoli calculated that the Italians were 33% of the Dalmatian population during the Napoleonic wars, while currently there are only 300 Italians in Croatian Dalmatia and 500 Italians in coastal Montenegro. .

All content from Kiddle encyclopedia articles (including the article images and facts) can be freely used under Attribution-ShareAlike license, unless stated otherwise. Cite this article:
Albania veneta Facts for Kids. Kiddle Encyclopedia.