Cautley Spout is England's highest (cascade) waterfall above ground. (Gaping Gill on Ingleborough falls a greater unbroken distance into a pothole, and Hardraw Force has a greater unbroken fall above ground). The broken cascade of falls tumbles a total of 650 feet (198 m) down a cliff face at the head of a wild and bleak glacial valley that comes down from a high plateau called The Calf. It is located in the Howgill Fells, traditionally in the West Riding of Yorkshire but now in Cumbria on the western edge of the Yorkshire Dales National Park. The waterfall is just north of the small town of Sedbergh. This fall is one of the few cascade falls in England; most are either tiered or plunge falls. 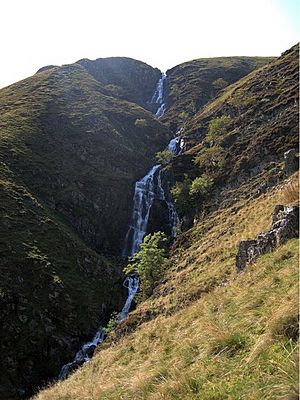 The upper section of Cautley Spout

All content from Kiddle encyclopedia articles (including the article images and facts) can be freely used under Attribution-ShareAlike license, unless stated otherwise. Cite this article:
Cautley Spout Facts for Kids. Kiddle Encyclopedia.