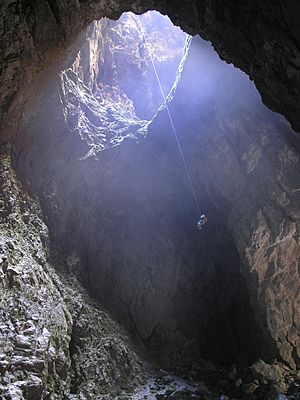 Caving in New Zealand is an established hobby as well as being a part of commercial tourism.

Recreational caving is practised by several hundred members of caving associations all over New Zealand, who take advantage of the widespread limestone karst cave systems present in the country, especially in the Waitomo District of the North Island and in the Nelson-Tasman region of the South Island. There are also several hundred thousands of visitors to various tourist caves in New Zealand per year, though a majority of these trips would not properly be called caving.

New Zealand caving as an exploratory sport is thought to have started with a group of Auckland-area people who started to explore the lava caves in the volcanic cones of the area in the 1940s (though commercialised trips through caves at Waitomo Caves had actually already existed for several decades). The group quickly progressed to exploring caves in the Waikato and King Country areas, and the New Zealand Speleological Society was founded in 1949 by Henry Lambert, with the first rough facilities at Waitomo being established in 1955.

In 1957, the discovery of Harwood's Hole in the South Island was to fully establish New Zealand as a country with extremely promising cave systems, and the cave with its 183 metre deep vertical entry shaft, and its passages extending for many hundreds of meters into the depths, was for a long time the deepest and most famous non-commercial cave in New Zealand. The area around Nelson also contains most of New Zealand's deepest caves (most discovered in the following decades), including Bulmer Cavern, a 70 km long cave system.

New Zealand's cavers are mostly organised in the New Zealand Speleological Society (NZSS), with 9 affiliated caving clubs with a total of 300 members all over the country.

As well as lava caves in the Auckland volcanic field there are numerous limestone caves in the North Island, with the most well known being the Waitomo Caves. The longest and deepest caves are in the Kahurangi National Park in the South Island

New Zealand offers a number of adventure tourism activities and one of them is caving. Most of the commercial caving is done in the Waitomo area, but there are also tours offered in Fiordland and on the West Coast. Black water rafting, where the participants float through caves on tyre inner tubes, was an early tourism venture and has become extremely popular.

All content from Kiddle encyclopedia articles (including the article images and facts) can be freely used under Attribution-ShareAlike license, unless stated otherwise. Cite this article:
Caving in New Zealand Facts for Kids. Kiddle Encyclopedia.