Cecil B facts for kids

Cecil B. Moore is a neighborhood in the North Philadelphia section of the city of Philadelphia, Pennsylvania, United States. The neighborhood is sometimes referred to as "Templetown" by realtors, despite disapproval by the community and Temple University. The district is loosely arranged around the main campus of Temple University, hence the name 'Temple' town. It is now rapidly gentrifying due to an influx of Temple students during the past several years. The term Templetown was coined by former Temple president Peter J. Liacouras, but has only recently come into wide use after a real estate development company adopted the name.

Recently the renaissance of Progress Plaza shopping center can mainly be attributed to the economic impact of students within these borders, furthering Temple's expansion further south down broad street towards Center City. Furthermore, the purchase of the closed-down William Penn High School by the university, after redevelopment, will extend the footprint even further down Broad street towards Girard.

Names of the region 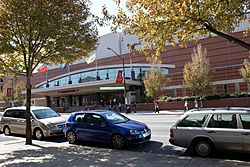 The region was named after Cecil Bassett Moore (April 2, 1915 – February 13, 1979) who was a Philadelphia lawyer, activists in the Civil Rights Movement who led the fight to integrate Girard College, president of the local NAACP, and member of Philadelphia's City Council. Moore is best remembered for leading a picket against Girard College which led to the desegregation of that school. He was also a champion of a wide range of causes central to the Civil Rights Movement, including integration of schools and trade unions, and increased political and economic representation for poor African-Americans. He has been credited with helping to restore order after the unsettling vandalism and violence of the racially charged Columbia Avenue riot of 1964. During his tenure, membership in the local NAACP chapter expanded from 7,000 in 1962 to more than 50,000 within a few years 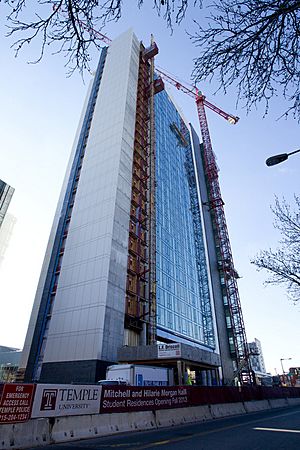 The Mitchell and Hilarie Morgan Hall (corner of North Broad Street and Cecil B. Moore Avenue in Philadelphia) under construction in 2013.

The Templetown nickname was widely used due to the influence of Temple University. The name, however, was not approved by either Temple University or its surrounding community. In October 2014 the Templetown name began to experience backlash from longtime local residents that became disgruntled due to 60 years of economic stagnation along the Cecil B Moore corridor. Gentrification due to the large influx of investment in the area can be attributed to demand created by the many students living in and around the Templetown borders. The complaints were strong enough that Google removed the name in favor of the Cecil B. Moore name.

All content from Kiddle encyclopedia articles (including the article images and facts) can be freely used under Attribution-ShareAlike license, unless stated otherwise. Cite this article:
Cecil B Facts for Kids. Kiddle Encyclopedia.