Celtis paniculata is a coastal rainforest tree. In Australia it occurs from Kiama (34° S) in New South Wales to the Endeavour River (15° S) in tropical Queensland. It also grows at Norfolk Island, eastern Malesia, Micronesia, and Polynesia. In Australia it is commonly known as native celtis or investigator tree. Often seen in coastal areas, but may also be found up to 800 metres above sea level.

The tree grows to 40 metres tall and 90 cm in trunk width, though usually much smaller. The trunk is mostly cylindrical and somewhat buttressed at the base. The bark is thin, greyish brown and smooth, with pustular vertical lines.

Leaves are elliptical in shape with a prominent leaf tip. Leaves are alternate and simple, smooth, not toothed, 6 to 10 cm long with a pointed tip. The leaf stalk is somewhat channelled and flattened on the top, and 6 to 10 mm in length. Both sides of the leaf are of a dull green shade. With a hand lens, translucent glands may be seen in the leaves. The base of the leaf is often oblique, that is of unequal length on either side of the leaf stem. Leaf venation is more evident under the leaf. An identifying feature is the intramarginal leaf vein, which starts at the leaf base and travels on either edge of the leaf, a distance of ¼ to ½ the length of the leaf.

Green flowers in axilliary cymes or panicles appear from December to January. The fruit is a black, round to oval shaped drupe, 8 to 10 mm long. containing a single seed. The seed has veiny ridges. Fruit matures from July to March.

This plant first appeared in scientific literature as Solenostigma paniculatum in 1833, published in the Prodromus Florae Norfolkicae by the Austrian botanist Stephan Endlicher. The type specimen was collected at Norfolk Island by the artist Ferdinand Bauer. The specific epithet paniculata refers to the tufted and branched flowers. In 1848 Jules Émile Planchon moved the species to the Celtis genus. Other common names include Native Hackberry, Silky Keltis, Silky Celtis, Tripewood and Whitewood.

The original "Investigator Tree" grew on Sweers Island in the Gulf of Carpentaria, named after Matthew Flinders' ship. The island was an important port on a major thoroughfare for 19th century Australian explorers. Later members of other expeditions in Australia’s maritime history made carvings on this tree.

Removal of the flesh from the seed is not advised when sowing. Germination takes between 48 to 100 days. The cotyledons are large, about 30 x 25 mm with an apex divided into two acute lobes. The first pairs of juvenile leaves are often toothed. At the tenth leaf stage leaves become oval in shape with a prominent tip. 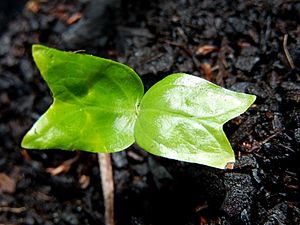 Celtis paniculata is a food tree for the blue beak, common aeroplane, tailed emperor and other butterflies. Many rainforest pigeons and other birds feed on the fruit. An endangered population of the beetle Menippus darcyi feeds on Celtis paniculata. The tree produces a useful general purpose timber, with a specific gravity of 0.70. 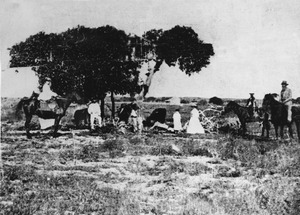 The original "Investigator Tree" on Sweers Island in 1871

All content from Kiddle encyclopedia articles (including the article images and facts) can be freely used under Attribution-ShareAlike license, unless stated otherwise. Cite this article:
Celtis paniculata Facts for Kids. Kiddle Encyclopedia.