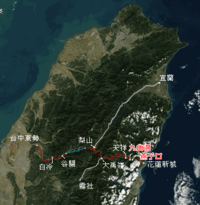 Central Cross-Island Highway (in red and blue). The blue parts are permanently closed because of earthquake and typhoon damage. 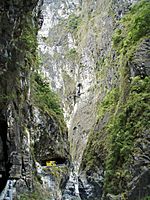 The Central Cross-Island Highway (中部橫貫公路) or Provincial Highway No.8 is one of three highway systems that connect the east and west coasts of Taiwan.

Construction of the Central Cross-Island Highway began on July 7, 1956 and it first opened to traffic on May 9, 1960. 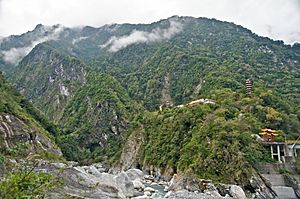 The highway begins in the west at Dongshi District in Taichung. The highway used to go up into the Central Mountain Range along the Dajia River (大甲溪) valley through the townships of Guguan (谷關) and Cingshan (青山). At Lishan there is a branch that heads north to Yilan City. It goes through the mountains to Dayuling (大禹嶺) which is the highest point of the route. Here another branch of the highway runs south from Dayuling to Wushe (霧社). Continuing east from Dayuling, the highway goes down into Taroko National Park. It passes through Guanyuan (關原), Cih-en (慈恩), Luoshao (洛韶) and Tiansiang (天祥) before entering Taroko Gorge. After the gorge the road then meets the eastern coastal Su'ao-Hualien Highway.

The highway goes through mountains. Rocks often fall and there can be landslides. Heavy rain from typhoons often push soil and rocks onto the highway so people cannot drive through parts of it. Earthquakes also damage the highway. On September 21, 1999 the Jiji earthquake caused a lot of damage to the highway and cut it in many places between Dongshih and Lishan.

There was so much damage in 1999 that repairing it would cost a lot of money. The damaged parts of the highway were supposed to re-open in 2004. However, heavy rain from the Typhoon Mindulle added more damage to the highway. These parts were closed. The highway is still closed between Lishan and Guguan. There is no plan to repair it, but the New Central Cross-Island Highway is another way across the island.

All content from Kiddle encyclopedia articles (including the article images and facts) can be freely used under Attribution-ShareAlike license, unless stated otherwise. Cite this article:
Central Cross-Island Highway Facts for Kids. Kiddle Encyclopedia.