The park is well known because it has beautiful mountains and cliffs.

The meaning of "Taroko" is magnificent or beautiful in the Truku language.

The area in and around the park was created by the Liwu River. The river slowly cut through the rock to create the gorge.

The Atayal and the Sedek tribes came to the area over 300 years ago. Researchers found more than 70 villages from the tribes. There was a trail to Taroko called the Northern Road. The Qing Dynasty helped improve it. The Japanese then built a road system along the coast.

The park was first created in 1937 when Taiwan was ruled by the Japanese. When they created it, it was called Tsugitaka-Taroko National Park. When the Chinese government came back to Taiwan in 1945, they closed down the national park. In the 1950s, Chiang Kai-shek wanted a road that crossed Taiwan from west to east. In 1960, this road was opened, called the Central Cross-Island Highway. It runs through the Taroko Gorge.

The park was created again in 1986. It was important because it showed that the Taiwanese government knew that they were damaging the environment.

The park has many rivers, waterfalls, and gorges. It has 20 kilometres (12 miles) of cliffs. It also has 27 of the "100 Peaks of Taiwan", which includes Mount Nanhu. Mount Nanhu is 3,800 metres (12,500 feet) high and the fifth tallest mountain in Taiwan. The area has a lot of marble and it also has the only jade found in Taiwan.

The park is surrounded by the Pacific Ocean in the east, the Dajia River in the north, and the Zhoushui River in the west. The park covers around 920 square kilometres (360 square miles) of land and covers Hualien County, Taichung, and Nantou.

There are 152 kinds of birds, 46 kinds of mammals, 35 kinds of reptiles, and 21 kinds of fish in the park. They include the Formosan wild boar and the Formosan monkey. 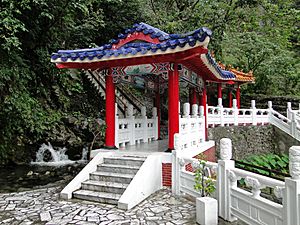 Taroko National Park has many monuments and attractions to help people learn about the Truku people and people that built the Highway. They include the Eternal Spring Shrine (also called the Changchun Shrine), and the Taroko village. In the park, many people come to hike. There are many hiking trails in the park.

The Eternal Spring Shrine was built to honour the 226 people who died building the Central Cross-Island Highway. It has two waterfalls coming out from the building. There are many hiking trails that begin there. There is also a cave with statues in it.

All content from Kiddle encyclopedia articles (including the article images and facts) can be freely used under Attribution-ShareAlike license, unless stated otherwise. Cite this article:
Taroko National Park Facts for Kids. Kiddle Encyclopedia.