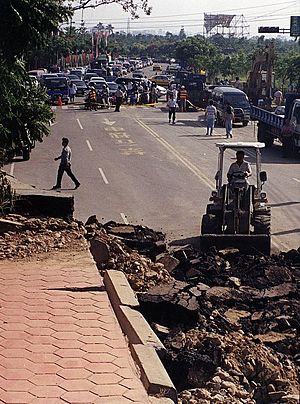 The earthquake caused much damageNational Fire Agency, Ministry of the Interior R.O.C. This damage included:

The earthquake continued to shake Taiwan throughout the night. People tell stories about a house that was not destroyed but moved by the earthquake from one county to another. The story says that because of this, the owners of the house had to change their address.

The epicenter of the earthquake was Chichi Township. The 921 Earthquake happened along the Chelungpu fault line in western part of the island of Taiwan. The fault is located along the foothills of the Central Mountains in Nantou and Taichung counties. Some sections of land near the fault were changed in elevation by as much as 7 meters (23 feet). Near the northern end of the fault line, a 7-meter tall waterfall was created by the earthquake. In the middle-western part of the island, bridges were destroyed. This stopped traffic for weeks.

In Wufeng, a village in southern Taichung County, the damage was very bad. The village's Guangfu High School was located on the fault line. It was badly damaged by the quake. Today the high school is the site of the National Museum of Natural Science's 921 Earthquake Museum of Taiwan.

All content from Kiddle encyclopedia articles (including the article images and facts) can be freely used under Attribution-ShareAlike license, unless stated otherwise. Cite this article:
1999 Chi-Chi earthquake Facts for Kids. Kiddle Encyclopedia.