Central Station was an intercity passenger terminal in downtown Chicago, Illinois, at the southern end of Grant Park near Roosevelt Road and Michigan Avenue. Owned by the Illinois Central Railroad, it also served other companies via trackage rights. It opened in 1893, replacing Great Central Station (on the site of the current Millennium Station), and closed in 1972 when Amtrak rerouted services to Union Station. The station building was demolished in 1974. It is now the site of a redevelopment called Central Station, Chicago.

Adjoining platforms at Roosevelt served the Illinois Central's suburban trains for both the Electric and West lines, in addition to the South Shore Line interurban railroad. All three lines continued north to Randolph Street.

The Romanesque Revival structure, designed by Bradford L. Gilbert and built by the Illinois Central Railroad, opened April 17, 1893 to meet the traffic demands of the World's Columbian Exposition. The nine-story building featured a 13-story clock tower and housed the general offices of the railroad. It boasted the largest train shed in the world at the time, which measured 140 by 610 feet.

The station was built, owned and used by the Illinois Central Railroad for intercity trains, with connections to commuter trains and the South Shore Line across an adjacent bridge. It was also used by the Illinois Central's Chicago, Madison and Northern Railroad, merged into the IC in 1902, which reached the station via the St. Charles Air Line Railroad, meeting the IC main line just south of the station. 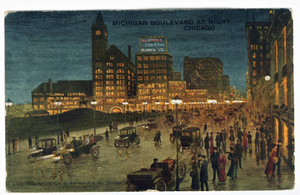 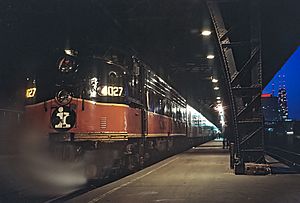 The Hawkeye at Central Station on April 4, 1971

The Wisconsin Central Railway (part of the Minneapolis, St. Paul and Sault Ste. Marie Railway (Soo Line) after 1909) switched from Grand Central Station to Central in 1899 due to disagreements with the Chicago Terminal Transfer Railroad, which owned Grand Central. To get to Central it used a portion of the recently opened Chicago, Hammond and Western Railroad (later the Indiana Harbor Belt Railroad) from Franklin Park to Broadview, and the Illinois Central's Chicago, Madison and Northern Railroad from Broadview to the terminal. On December 15, 1903, the Pere Marquette Railroad's line to Porter, Indiana opened, and its trains were rerouted from Central to Grand Central. 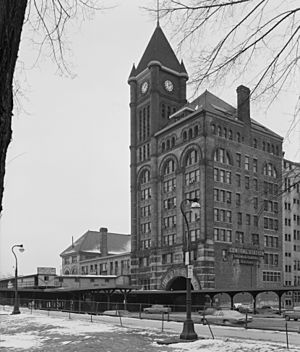 The Soo Line switched back to Grand Central Station in 1912. On March 1, 1925 the Chesapeake and Ohio Railway began using Central, switching from Dearborn Station. Its new alignment used the allied New York, Chicago and St. Louis Railroad (Nickel Plate Road) from Hammond, Indiana north to Grand Crossing, Illinois, where it joined the Illinois Central to its terminal. In 1965 the Soo Line once again switched stations, moving back into Central for its final years of passenger service. 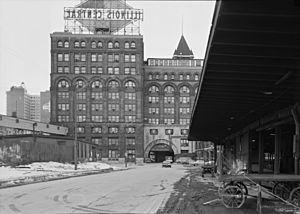 The rear of Central Station in February 1971, showing the large Illinois Central sign

By May 1, 1971, the startup date of Amtrak, Central was used only by trains of the Illinois Central Railroad (including the City of Miami, City of New Orleans and Panama Limited on the line south from Chicago, and the Hawkeye on the line to the west) and the Cleveland, Cincinnati, Chicago and St. Louis Railway (Big Four) (including the James Whitcomb Riley and South Wind). Amtrak continued only the City of New Orleans, James Whitcomb Riley and South Wind, as well as the IC's local Shawnee.

On January 23, 1972 Amtrak moved the Floridian (renamed from the South Wind in November 1971) to Union Station due to poor track conditions on its route in Indiana. The rest of the trains - the George Washington, James Whitcomb Riley, Panama Limited (temporarily renamed from the City of New Orleans, also in November 1971), and the Shawnee - last served Central Station March 5, 1972, after which they were rerouted to Union Station. The Panama Limited and Shawnee continued to use the IC to just south of Central Station, where they turned west onto the St. Charles Air Line as a realigned junction and ran west to Union Station, including at least one reversal to reach the station, a practice which continues today.

In late 1973, the Illinois Central relocated its general offices to the new Illinois Center. Demolition of Central Station and its train shed began on June 3, 1974. The commuter platforms remained until Spring 2009, serving the Metra Electric Line and NICTD's South Shore Line, when they were replaced with more modern structures and renamed Museum Campus/11th Street station. The railyards south of the station are the site of ongoing redevelopment as the Central Station project. 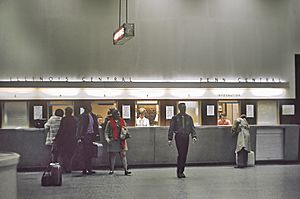 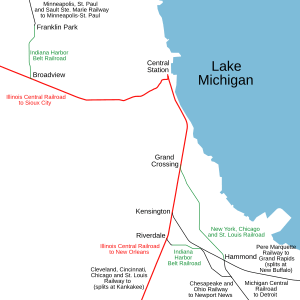 Trains into Central Station ran over the tracks of the Illinois Central Railroad.

Central Station was a terminal for the following lines and intercity trains:

The former Illinois Central electric commuter service is operated by Metra as its Electric Line and the former South Shore interurban is operated by the Northern Indiana Commuter Transportation District.

All content from Kiddle encyclopedia articles (including the article images and facts) can be freely used under Attribution-ShareAlike license, unless stated otherwise. Cite this article:
Central Station (Chicago terminal) Facts for Kids. Kiddle Encyclopedia.