South Chicago, formerly known as Ainsworth, is one of the 77 well-defined community areas of Chicago, Illinois.

This chevron-shaped community is one of Chicago's 16 lakefront neighborhoods near the southern rim of Lake Michigan 10 miles south of downtown. A working-class neighborhood, it is bordered by East 79th Street on the north, South Chicago Avenue (the Chicago Skyway) on the southwest, a small stretch of East 95th Street on the south. With the Calumet River on the community's southeast side, South Chicago can be considered the literal gateway to the Calumet Region and the first among the four Chicago neighborhoods (East Side, Hegewisch and South Deering) that are considered by the locals as Chicago's Southeast Side. Particularly unknown because most of its streets run off the citywide grid, it also encompasses the unique Alphabet Avenues. The Southeast Side is a description that, although true, the city itself continues to resist including this neighborhood with all of Chicago's South Side communities.

Once a separate community, South Chicago began as a series of scattered Native American settlements before becoming a village. First occupied by a chief named Askhum, considered 'lord' of the vast Callimink (Calumet) Valley and leader of the Pottawatomie people. They and other Native peoples used South Chicago and the shallow Calumet River area as portages, for seasonal settlements, hunting and fishing thousands of years before White settlers arrived to the "New World".

The post-Civil War era brought with it great industrial innovation. Developer James H. Bowen, the "Father of South Chicago," and others in a massive land grab wrested the land from its former existence and founded "Ainsworth" among other communities. This community was formed out of wetland prairie to provide residence for the labor force of European immigrants coming to work at the industries developing along the Calumet River, most notably the North Chicago Rolling Mill Company, built at the mouth of the river in 1881. Only fractions of the original topography and habitat remain as is the case with most of urban Chicago. With the entire Chicago Lakefront built on miles of landfill and slag there still remains a small stretch of semi-secluded beachfront just north of the Southworks Site. This bit of lakefront, once a seasonal settlement for the Pottawatomie, was left alone due to an umovable and deeply embedded bedrock of granite, which defied the development techniques of the time. It is the only natural beach frontage left and virtually unknown on the entire Chicago coastline. This beachfront and the massive outcrop of the Southworks table slag to the south and the water treatment plant to the north is a perfect demonstration of the vigorous advancement of the steel industry and 20th century development.

The four communities of Ainsworth; the Bush, Millgate Cheltenham/South Chicago and Calumet quickly developed into one village referred to collectively as South Chicago during the wave of annexation in 1883. The predominantly woodframed architecture of the Bush, Millgate and eastern Cheltemham are a lesson in Victoriana with the 'sunken yards' and bridge-like walk ups from street like Houston, Baltimore and Brandon attesting to the degree infrastructure built up from the original topography of that time. It also demonstrates how South Chicago was not immediately affected by the housing ordinances restricting the use of lumber for home building after The Great Fire of 1871. Most of the neighborhood north of East 83rd Street and west of South Manistee Avenue was developed after WWII and contain mostly brick homes, but under the ordinance brick homes began being built throughout the newly annexed neighborhood after 1883.

South Chicago was bustling with waves of immigrants as the popularity of the World's Columbian Exposition of 1893. The steel mill became U.S. Steel South Works in 1901, continuing to attract immigrants from Ireland, Eastern Europe, Scandinavia and Italy. During the 1950s many residents called the northeast section of South Chicago *"The Bush" and worked in the local massive steel mill, US Steel. Others worked in neighboring steel mills such as Youngstown Steel, Republic Steel, Bethlehem Steel, and LaSalle Steel. At its zenith, South Chicago helped make the Chicago metropolitan area the leading producer of steel products in the nation. The Willis Tower and the Hancock Building were built from South Chicago steel. The embers, (graphite) from the smokestacks would cause the cars and sidewalks to sparkle and created a golden glow throughout the night. Softball and bowling were popular pastimes. Large Polish weddings on Saturdays were also a common sight.

Throughout the early 1910s, Mexicans from a variety of regions within Mexico began to settle in communities throughout Chicago including South Chicago. South Chicago became one of the first growing Mexican communities in Chicago. The community faced many challenges including many racist attacks by the more assimilated groups. The early Mexican community began to band together and worked to help build Our Lady of Guadalupe Church as they were not welcomed in other churches throughout the area. South Chicago's Mexican Patriotic Club's Mexican Independence Day (Sept. 16th) Parade was the first such parade in Chicago also celebrated with a carnival of rides and booths.

While South Chicago has a sizable African American population, existing ethnic groups continue to have strong community ties in the area. Our Lady of Guadalupe is the oldest parish founded by Mexicans in the City of Chicago. Immaculate Conception, St. Michael's, two churches built in the 'Polish Cathedral style' and later Saint Bronislava have served South Chicago's Polish residents for over 80 years and now have significant sized Latino populations as well. The first Catholic parish established in South Chicago was St. Patrick, which was founded by Irish Catholics.

Wedged between East 89th Street, South Muskegon Avenue and the sycamore tree-lined South Chicago Avenue is the historic triangular Bessemer Park, named after English inventor Henry Bessemer, whose iron ore refining process revolutionized steel production. The park was designed by the Olmsted Brothers of the renowned landscape architect Frederick Law Olmsted of New York City's Central Park, as well as Chicago landmarks Washington Park and Jackson Park, built for the World's Columbian Exposition of 1891. Their work on the park started in early 1904 and finished late in 1905. The fieldhouse, only modestly upgraded, retains much of its original charm. The Bessemer Park Nature and Wildlife Garden is among Chicago's 23 noted natural "preserves" of native fauna and wildlife habitat. Bessemer Park and Russell Square Park on the corner of Bond Avenue and East 83rd Street (*the Bush), are among their last commissions, Bessemer Park is one of the largest parks on the South Side. Eckersall Playground Park and Stadium is centrally located in South Chicago at the corner of East 83rd Street and South Yates Avenue. Other new greenspaces are planned throughout the community including what is currently called "Park No. 503" at 8900 South Green Bay Avenue in the Millgate community. Designated bicycle paths from East 83rd Street, South Shore Drive/Mackinaw Avenue and South Chicago Avenue connect directly to the Burnham Greenway Trail which links to a comprehensive system of greenways throughout the Calumet Region. 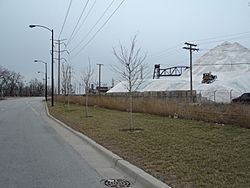 salt pile between South Harbor Avenue and the Calumet River

Since the de-industrialization of South Chicago's once inaccessible shoreline from the late 1970s on, East 87th Street has been extended to Lake Michigan with the look and feel of a landscaped boulevard. The former Southworks site Brownfield, an area larger than the Loop, is a cleared and remediated table of slag and concrete, currently being transformed into Chicago's newest lakefront park with the feel of wide open prairie land. The purchase of the property from notable world-class developers, has put South Chicago at the center of the city's, and the Nation's largest lakefront redevelopment effort in the 21st Century. Mixed residential, retail and lake recreation are quietly planned. The new lakefront park, as yet nameless (which is nearing completion), was the missing link effectively closing the century old gap between Chicago's world-class chain of parks between South Shore's Rainbow Beach Park in South Shore and Calumet Park in East Side neighborhoods, fulfilled the dreams of noted Chicago planner and architect, Daniel Burnham and business mogal and philanthropist Montgomery Ward, for a free and clear lakefront. Famed architect Frank Lloyd Wright had also once designed a comprehensive plan for the shoreline before it became hyper-industrialized.

South Chicago is not currently connected to the Chicago "L" rapid transit system. The nearest CTA Red Line station is located 3 miles west, at 95th Street & Dan Ryan Expressway. The CTA Green Line is 5 miles north, at 63rd Street and Cottage Grove Avenue. The South Chicago neighborhood does, however, contain 4 newly rebuilt Metra Electric Line, South Chicago Branch stations: Cheltenham and East 79th Street, East 83rd Street, 87th Street, and 93rd Street/South Chicago, which terminates in the heart of the neighborhood's business district along South Baltimore Avenue, and is the community's most accessible commuter rail service to downtown Chicago. Although Metra is mainly a suburban service, the outbound South Chicago Branch, which terminates within Chicago's city limits is the only Metra line to do so. The Chicago Skyway borders South Chicago Avenue, running northwest towards the Dan Ryan Expressway and southeast towards Hammond, Indiana. It can be entered nearby only towards Indiana, but has one westbound entrance, to the southeast at Indianapolis Boulevard & Avenue B.

South Chicago is also served by a number of Chicago Transit Authority bus routes, services which enable commuters to make relatively easy connections to downtown and other Chicago neighborhoods. The buses that serve South Chicago are:

Chicago’s plan is to be rated by the United States Green Building Council and is part of the Council's LEED (Leadership in Energy and Environmental Design) for Neighborhood Development pilot program.

A thirty-year development plan estimated to cost $4 billion was approved by the city in September 2010, for the former site of the huge steel mill, which operated along the neighborhood's shoreline from 1880 to 1992. The site has undergone extensive demolition and environmental remediation since 1992. The plan called for extension of Lake Shore Drive, with site construction and was to begin in 2012.

All content from Kiddle encyclopedia articles (including the article images and facts) can be freely used under Attribution-ShareAlike license, unless stated otherwise. Cite this article:
South Chicago, Chicago Facts for Kids. Kiddle Encyclopedia.