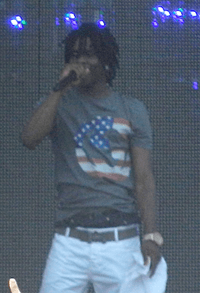 Chief Keef at the 2012 Lollapalooza

Keith Farrelle Cozart (born August 15, 1995), better known by his stage name Chief Keef, is an American rapper and record producer. He was born in South Side, Chicago and raised in Washington Park. Keef's music first became popular among high school students from Chicago's South Side during his teen years in the early 2010s.

In 2012, Keef's popular street single "I Don't Like" was remixed by rapper Kanye West, reaching the Billboard Top 10. His debut album Finally Rich was released in December 2012, and featured the successful singles "I Don't Like" and "Love Sosa".

All content from Kiddle encyclopedia articles (including the article images and facts) can be freely used under Attribution-ShareAlike license, unless stated otherwise. Cite this article:
Chief Keef Facts for Kids. Kiddle Encyclopedia.