Ceolwulf of Wessex facts for kids 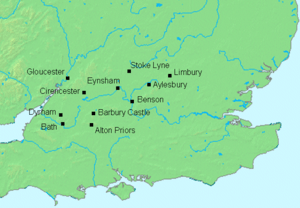 Ceolwulf was the grandson of Cynric. He succeeded his brother Ceol. The first mention of him as king in the Anglo-Saxon Chronicle was in 597. He "continuously fought with success against the Angelcyn and Britons; Picts and Scots." During this time the West Saxons controlled Berkshire and Wiltshire. They also occupied parts of Somerset and Hampshire. Historians question whether he could have attacked the Picts and Scots. The Gewisse (West Saxons) were not known to range that far north into Scotland. The Picts may have reached as far south as Chester. But there is no record of Ceolwulf fighting in Chester. The chronicle records he fought the South Saxons in 607. The Jutes in the South of England would have acknowledged him as their overlord. He would have been fighting against Pybba of Mercia. Ceolwulf died in 611. He was succeeded by Cynegils

Ceolwulf had a son:

All content from Kiddle encyclopedia articles (including the article images and facts) can be freely used under Attribution-ShareAlike license, unless stated otherwise. Cite this article:
Ceolwulf of Wessex Facts for Kids. Kiddle Encyclopedia.