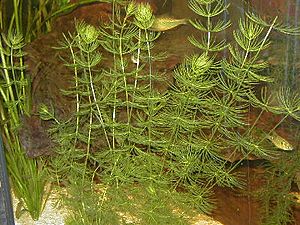 Ceratophyllum submersum, commonly known as the soft hornwort or tropical hornwort, is a species of Ceratophyllum. It is a submerged, free-floating aquatic plant. It has been reported from Europe, Central Asia, northern Africa, scattered places in tropical Africa, Turkey, Oman, Florida, and the Dominican Republic. It is similar to the submerged macrophyte Ceratophyllum demersum, a congeneric plant that is found in most regions of the world.

C. submersum prefers to colonize eutrophic waters around agricultural systems. C. submersum is a self-regulating rapid grower like Ceratophyllum demersum. It strives in a moderately lit environment. In a strong lighted environment C. submersum attains an auburn color tint. Carbon dioxide would speed up growth for C. submersum, but it doesn’t require CO2. Since this aquatic plant has a fast growth it has to be trimmed often, or at least be provided a larger tank or environment to accommodate it for proper function. It is found submerged in freshwater in tropical regions of the world, with the species being introduced in newer areas around the world, such as Ireland. It has been found in the Rosetta branch of the Nile River of Egypt, where it thrives in either various locations at different times of the year.

C. submersum is often used in aquariums as a way to decrease nitrogen in artificial aquatic systems. However, it is not as common in usage as the C. demersum. It is propagated by cutting the stem of the plant and placing it in the aquatic system. After the organic matter is converted to soluble inorganic matter the C. submersum helps to oxygenates waste water.

All content from Kiddle encyclopedia articles (including the article images and facts) can be freely used under Attribution-ShareAlike license, unless stated otherwise. Cite this article:
Ceratophyllum submersum Facts for Kids. Kiddle Encyclopedia.