Cercophonius squama, commonly known as the forest scorpion or wood scorpion, is a scorpion native to southeastern Australia. It is typically around 25–40 mm (0.98–1.57 in) long. Its colour consists of different shades of brown.

The body is creamy yellow to orange brown with dark brown variegations. The legs are yellow with some dark brown pigment. 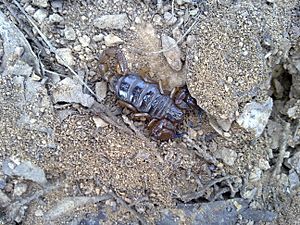 An Cercophonius Squama as seen in situ near the Australian Capital Territory.

C. squama is found in South Australia, Victoria, New South Wales, the ACT and Tasmania. It is the only scorpion found in Tasmania.

Insemination occurs before winter and birth typically occurs during summer. Females give birth to 20-30 live young over a period of several hours. The young are white and soft-bodied at birth. Females have been observed selectively eating some of the young but the trigger is not known. It takes approximately two weeks for the exoskeleton to completely form for newborns.

All content from Kiddle encyclopedia articles (including the article images and facts) can be freely used under Attribution-ShareAlike license, unless stated otherwise. Cite this article:
Cercophonius squama Facts for Kids. Kiddle Encyclopedia.