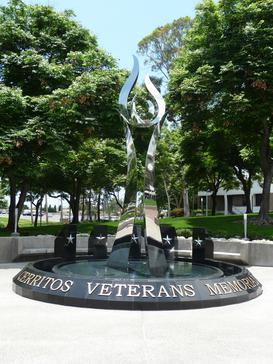 The Cerritos Veterans Memorial, located in Cerritos, California is a 20-foot-high (6.1 m) sculpture dedicated in honor of local veterans. The sculpture is part of a "Cerritos Veterans Project," which seeks to preserve the stories of veterans who are current or former residents of the City of Cerritos. The sculpture, which was designed and built by artist James T. Russell, sits on the grounds of the Cerritos Civic Center.

The memorial was dedicated at the first annual Veterans Day ceremony on November 11, 2006. The memorial contains a 20-foot-high (6.1 m) stainless steel sculpture in the shape of a flame atop a reflecting pool. There are five pedestals surrounding the pool, each containing the emblem of one branch of the United States armed forces: Army, Navy, Air Force, Marines, and the Coast Guard. Off to the side, there are two other pedestals, one in honor of the Merchant Marine, and another honoring all 32 groups who were recognized by Congress for their efforts during World War I and World War II.

The memorial serves as a focal point for the various official city ceremonies which have a patriotic theme. The dedication ceremony in 2006 served as the city's first annual Veterans Day ceremony, and the first annual Memorial Day ceremony took place in 2008. Starting in 2007, the city also moved its Let Freedom Ring ceremony to celebrate the Fourth of July to the grounds around the Cerritos Veterans Memorial, and in 2010 the city held its Patriot Day concert in that venue.

All content from Kiddle encyclopedia articles (including the article images and facts) can be freely used under Attribution-ShareAlike license, unless stated otherwise. Cite this article:
Cerritos Veterans Memorial Facts for Kids. Kiddle Encyclopedia.