In this Korean name, the family name is Cha. 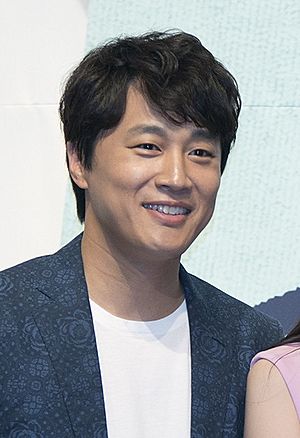 Cha Tae-hyun is a South Korean actor. He was born on March 25, 1976. He is also a singer, radio DJ and entertainer in variety programs.

His start was in the KBS Talent Contest. In this contest, he got silver medal. His first drama was Our Sunny Days of Youth. He played minor roles at first. Then starting with the other dramas, he became a big star. He became popular and appeared in TV commercials. He has acted in 18 dramas. In 2013, he appeared in the TV drama Jeon Woo-chi.

After Jeon Woo-chi, he focused on movies and TV variety programs. He appeared in 22 movies. From Hallelujah (1997) to The Grand Heist (2012), he performed various characters in the movies. In 2013, he prepared the movie Slow Video.

He appears on a TV variety program every Sunday. This program is called 1 night & 2 days.

All content from Kiddle encyclopedia articles (including the article images and facts) can be freely used under Attribution-ShareAlike license, unless stated otherwise. Cite this article:
Cha Tae-hyun Facts for Kids. Kiddle Encyclopedia.