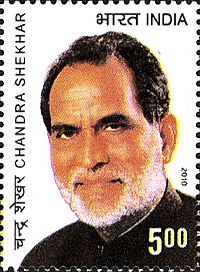 Chandra Shekhar (1 July 1927 – 8 July 2007) was an Indian politician. He was the 8th Prime Minister of India between 10 November 1990 and 21 June 1991. He was born in Ibrahimpatti, Ballia, United Provinces, British India. Shekhar was mainly a member of the Janata Party.

Shekhar died on 8 July 2007 in New Delhi from multiple myeloma at the age of 80.

All content from Kiddle encyclopedia articles (including the article images and facts) can be freely used under Attribution-ShareAlike license, unless stated otherwise. Cite this article:
Chandra Shekhar Facts for Kids. Kiddle Encyclopedia.