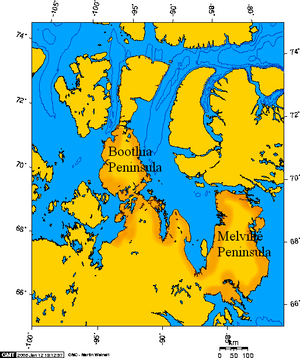 Chantrey Inlet (Tariunnuaq) is a bay on the Arctic coast of Canada. It marks the southeast "corner" where the generally east–west coast turns sharply north. To the west is the Adelaide Peninsula and to the east is mainland. King William Island shelters it to the northwest. If King William Island were not an island then Chantry Inlet, Rae Strait, Wellington Strait and James Ross Strait would be a single large bay. To the west the Simpson Strait separates King William Island from the Adelaide Peninsula. Its mouth is marked by Point Ogle on the west and Cape Britannia on the east. West of Point Ogle is Barrow Bay, Starvation Cove and Point Richardson. The Back River enters from the south. Near its mouth is a weather station on the Hayes River. Montreal Island is contained within the Inlet. It is 100 mi (160 km) long and 50 mi (80 km) wide at its mouth.

Chantrey Inlet is the historical territory of the Utkuhiksalik (the people of the place where there is soapstone), nomadic Inuit who lived in snowhouses (igloos) in the winter, tents in the summer, and whose diet centered on trout (lake trout and Arctic char), whitefish, and caribou. In 1834 George Back followed the Back River to its mouth and explored Chantrey Inlet. In 1839 Peter Warren Dease and Thomas Simpson reached it by sailing along the coast from the west. In the present day, sportsmen arrive in Chantrey Inlet by chartered bushplane for fishing.

All content from Kiddle encyclopedia articles (including the article images and facts) can be freely used under Attribution-ShareAlike license, unless stated otherwise. Cite this article:
Chantrey Inlet Facts for Kids. Kiddle Encyclopedia.