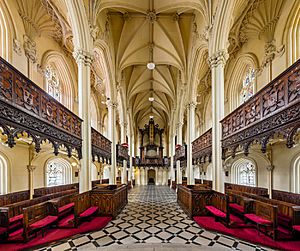 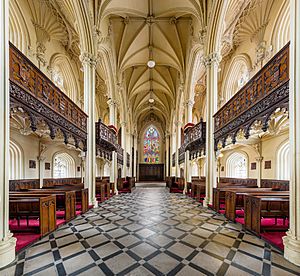 The interior of the chapel looking east toward the stained glass

Designed by Francis Johnston (1760–1829), the foremost architect working in Ireland in the early 19th century, and architect to the Board of Works, the chapel contains one of the finest Gothic revival interiors in Ireland. Replacing an earlier undistinguished 18th century church that suffered structural problems through being built on soft ground close to the site of the original castle moat, the new Chapel Royal was built using a timber frame to make it as light as possible. Indeed, so difficult was the nature of the site that the chapel took seven years to build, though a contributory factor in both time and budget was the "sheer opulence" of its interior.

The foundation stone was laid by the Lord-Lieutenant, John Russell, 6th Duke of Bedford, on 15 February 1807. It was completed behind schedule (the budget also substantially overran) and opened on Christmas Day, 1814, when Charles Whitworth, 1st Earl Whitworth was Lord-Lieutenant. Lord Whitworth contributed the centre portion of the large stained-glass window above the altar, which he had purchased while in Paris, and which reputedly had come from Russia (he had been plenipotentiary in St. Petersburg in the 1790s). The surroundings are painted glass, executed by a Mr. Bradley in Dublin. At the apex of the window are the arms of Lord Whitworth.

The decoration of the ceiling of the interior was done by George Stapleton (son of Michael Stapleton), a leading stuccodore of the time, while sculptor Edward Smyth (responsible for the "river heads" on the Custom House) and his son John (responsible for the statues on the GPO) carved the larger figures. Over the chancel window are three life-size figures representing Faith, Hope and Charity. Over the galleries are heads representing Piety and Devotion. All the interior vaulting and columns are cast in timber and feature a paint wash (faux pierre) to give the effect of stone. It was described as having "the most flamboyant and luxurious Dublin interior of its era."

The exterior was clad in a thin layer of "fine limestone from Tullamore quarry", and famously features over 90 carved heads, including those of Brian Boru, St. Patrick, Archbishop Ussher and Jonathan Swift, done by Edward and John Smyth. 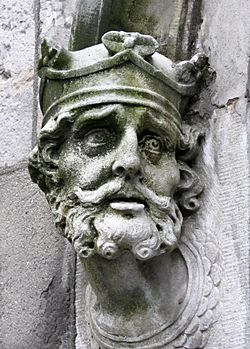 This was the third chapel in the castle, and the second on this spot, since medieval times. Before the completion of the Chapel Royal the Lord-Lieutenants, their entourage and hangers-on went to St Werburgh's church at the rear of the Castle to the west. The enormous pulpit that used to dominate the Chapel Royal has now been removed to St. Werburgh's.

Behind one of the galleries is a passage that leads to the bedrooms in the State Apartments. This was used by the Lord Lieutenant and his entourage when they were staying at the Castle during inclement weather. His pew (or throne) was in the centre of the right-hand gallery. Directly facing him was the place for the bishop. It might seem as no co-incidence that Lord Whitworth's arms appear directly at the Lord-Lieutenant's position, a most prominent spot.

The large organ, still playable, is said to have been a gift from Prince Albert, consort of Queen Victoria. The wooden decoration contains a carved head in the centre, which is said to be that of Turlough O'Carolan, the famous Irish composer.

As each Lord Lieutenant left office, their coat of arms was carved on the gallery, and then, when space ran out, placed in a window of the chapel. It was noted by Irish nationalists that the last window available was taken up by the man who proved to be the last Lord Lieutenant, Viscount Fitzalan (who was himself a Catholic).

In 1943, the church became the property of the Irish Army, and the former Church of Ireland chapel became a Roman Catholic Church, under the name the Church of the Most Holy Trinity. The Stations of the Cross were then carved by the monks in Glenstal Abbey and presented to the church in 1946. Though it has not been deconsecrated, neither Masses nor Divine Services take place there any more. It has however been recently restored to its nineteenth-century state and is open to the public. The crypt is sometimes used for cultural events.

The Chapel was used in the television series The Tudors for scenes including the trial of Thomas More. 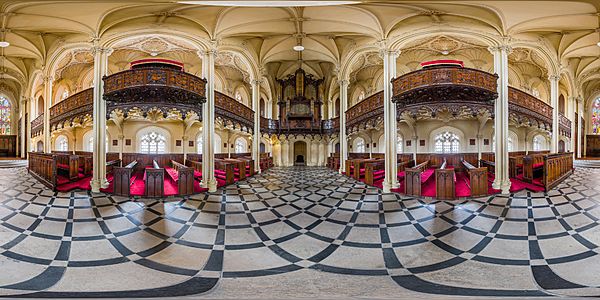 The interior of the Chapel Royal in Dublin Castle

All content from Kiddle encyclopedia articles (including the article images and facts) can be freely used under Attribution-ShareAlike license, unless stated otherwise. Cite this article:
Chapel Royal, Dublin Facts for Kids. Kiddle Encyclopedia.