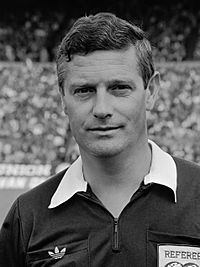 He refereed the 1982 World Cup semifinal between Germany and France in Seville, Spain. Corver was referee at two World Cups and two European championships. He refereed four European Cup finals, ten semifinals and a final World Cup for clubs in Argentina. He retired in 1983.

Corver was born in Leiden and died in Leidschendam at the age of 84.

All content from Kiddle encyclopedia articles (including the article images and facts) can be freely used under Attribution-ShareAlike license, unless stated otherwise. Cite this article:
Charles Corver Facts for Kids. Kiddle Encyclopedia.