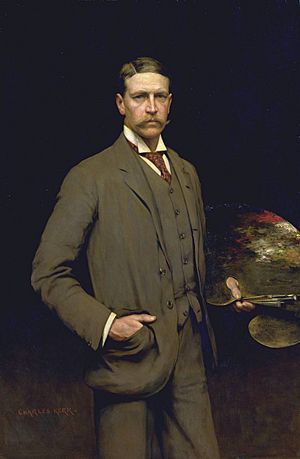 Born in London, one of six sons and two daughters of Robert Malcolm Kerr (1821–1902), a Judge of the City of London Court, and Maria Susannah Soley Kerr, Charles Kerr was educated at Corpus Christi College, Oxford. On leaving Oxford he studied at the Royal Academy Schools and at the Académie Julian in Paris. He exhibited regularly at the Royal Academy from 1884, including 'Wargrave Church', 'The Oldest Inhabitant', 'An Academy Picture' and numerous portraits.

Kerr was amongst those invited to a dinner on 1 May 1889 at the Criterion Restaurant to congratulate James Abbott McNeill Whistler on becoming an Honorary Member of the Royal Academy of Fine Arts in Munich. He married Gertrude Lizzie Giles, who posed for his 1905 painting 'The Visitor', now in the collection of the Tate.

He died at his home in Burgess Hill just over a year later in December 1907 aged 49.

All content from Kiddle encyclopedia articles (including the article images and facts) can be freely used under Attribution-ShareAlike license, unless stated otherwise. Cite this article:
Charles H. M. Kerr Facts for Kids. Kiddle Encyclopedia.