Karl John (Karl Johan) Andersson (4 March 1827 in Norra Råda Värmland, Sweden – 9 July 1867 in Angola) was a Swedish explorer, hunter and trader as well as an amateur naturalist and ornithologist.

He is most famous for the many books he published about his travels, and for being one of the most notable explorers of southern Africa, mostly in present-day Namibia.

Karl Johan Andersson was born on 4 March 1827 in Värmland in Sweden. He was the illegitimate child of the British bear hunter Llewellyn Lloyd and Lloyd's Swedish servant.

Andersson grew up in Sweden. Early in his life he went on hunting expeditions with his father, experienced Swedish nature and started a collection of biology specimens.

In 1847 he started studies at the University of Lund. 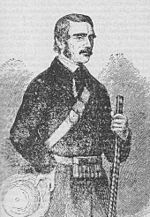 In 1849 he departed for London, intending to sell his collection to raise money for travels around the world. In London he met with the explorer Francis Galton, with whom he organised an expedition to Southern Africa. On midsummer day in 1850 they arrived at the Cape of Good Hope and then travelled to Walvis Bay, in modern-day Namibia. They then trekked into the interior, at the time little explored by Europeans. They intended to reach Lake Ngami, but failed on that expedition.

Galton returned home to England, while Andersson stayed in the area and reached Lake Ngami in 1853. In 1855 he returned to London, where he published his book "Lake Ngami", in which he describes his travels. He returned to Africa the same year.

Back in south west Africa, Andersson was hired as manager for mines in what was then called Damaraland and Namaqualand. However, he only held the position for a brief time, and continued his explorations. In 1859 he reached the Okavango River, an expedition that he recorded in his book The Okavango River.

After his return, he travelled to the Cape, where he married. Andersson and his wife settled in Otjimbingwe (in modern central Namibia).

Andersson had repeated financial problems. Even though his main interests were exploration and natural history, he often needed to earn money through trade and hunting. He lacked the money needed to publish his books and Galton declined to lend him any.

In 1867, despite serious illness, Andersson travelled north towards the Portuguese settlements in modern Angola, in order to establish a better trading route to Europe. He was unable to cross the Cunene River, so he had to turn back. His condition had worsened during his journey to the Cunene and, on the return journey, he died on 9 July 1867. He was buried by another Swede, Axel Eriksson.

After his death, Andersson's wife and children continued to live in Africa, in the Cape Colony.

His father published notes from some of his expeditions in the book "Notes of Travel in South-Western Africa".

All content from Kiddle encyclopedia articles (including the article images and facts) can be freely used under Attribution-ShareAlike license, unless stated otherwise. Cite this article:
Charles John Andersson Facts for Kids. Kiddle Encyclopedia.