Charleston Naval Shipyard (formerly known as the Charleston Navy Yard) was a U.S. Navy ship building and repair facility located along the west bank of the Cooper River, in North Charleston, South Carolina and part of Naval Base Charleston.

It began operations in 1901 as a drydock, and continued as a navy facility until 1996 when it ceased operations as the result of recommendations of the 1993 Base Realignment and Closure Commission. At that time it was leased to Detyens Shipyards, Inc.

Originally designated as the Navy Yard and later as the Naval Base it had a large impact upon the local community, the tri-county area and the entire State of South Carolina.

The yard first produced the destroyer USS Tillman (DD-135), then began to increase production in the 1930s. A total of 21 destroyers were assembled at the naval facility. 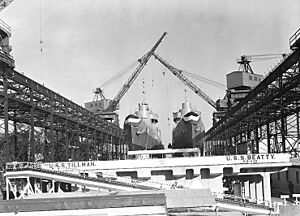 "Two of the largest vessels ever built at the yard were two destroyer tenders, the USS Tidewater (AD-31) and the USS Bryce Canyon (AD-36). The keels of these ships were laid in November 1944 and July 1945, respectively. Peak employment of 25,948 was reached in July 1943.

After the war, the shipyard was responsible for the repairs and alterations of captured German submarines. In April 1948, Secretary of the Navy John L. Sullivan told Charleston's Representative Rivers and Senator Burnet R. Maybank that the navy planned for CNSY to become a submarine overhaul yard and would ask for an initial appropriation for a battery-charging unit. 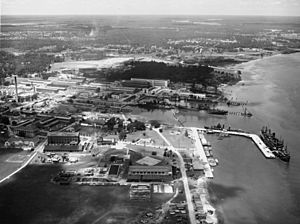 Aerial view of the Charleston Navy Yard in 1941.

The first submarine, the USS Conger (SS-477), arrived for overhaul in August 1948. The shipyard expected to overhaul about 132 ships during the year, and its work force had stabilized to nearly 5,000 persons.

North Korean invasion of South Korea in June 1950 increased production once again. By 1951, the shipyard was back to over 8,000 employees. In all, the shipyard activated forty-four vessels and converted twenty-seven for active fleet duty during the Korean War.

Submarines continued to be built into the 1960s along with missiles, and nuclear submarine overhauls took place including the USS Scorpion (SSN-589) in 1962. In 1966, the shipyard completed the first refueling of a nuclear submarine, the USS Skipjack (SSN-585), and began its first overhaul of an Fleet Ballistic Missile (FBM) submarine, the USS Thomas A. Edison (SSBN-610). Work began on deepening Dry Dock No. 2 so it could handle the massive FBM submarines and destroyers fitted with sonar."

The facility remained a major installation throughout the Cold War as a homeport to numerous cruisers, destroyers, attack submarines, FBM submarines, destroyer tenders, and submarine tenders of the U.S. Atlantic Fleet until its closure in the 1990s as a result of the end of the Cold War and subsequent BRAC Commission action.

With the closure of the Naval Base and Charleston Naval Shipyard in 1996, Detyens, Inc. signed a long term lease. With three dry docks, one floating dock, and six piers, Detyens Shipyards, Inc. is the largest commercial facility on the East Coast. Projects include military, commercial, and cruise ships.

Lastly, a 340-acre section of the former base is being revitalized as a sustainable, mixed-use urban hub for the city of North Charleston. The new development is called The Navy Yard at Noisette. Ground broke in 2005.

All content from Kiddle encyclopedia articles (including the article images and facts) can be freely used under Attribution-ShareAlike license, unless stated otherwise. Cite this article:
Charleston Naval Shipyard Facts for Kids. Kiddle Encyclopedia.