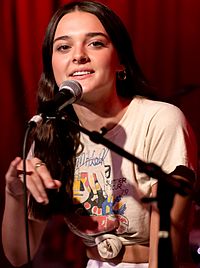 Charlotte Sarah Lawrence (born June 8, 2000) is an American singer-songwriter and model. Her extended play, Young, was released in 2018. One of her single's, "Joke's on You", is featured on the soundtrack of the movie Birds of Prey. She is signed to IMG Models and has appeared in magazines such as Teen Vogue and Harper's Bazaar.

Lawrence was born in Los Angeles, California. She is the daughter of actress Christa Miller and television producer Bill Lawrence.

All content from Kiddle encyclopedia articles (including the article images and facts) can be freely used under Attribution-ShareAlike license, unless stated otherwise. Cite this article:
Charlotte Lawrence Facts for Kids. Kiddle Encyclopedia.