Chatham is a village in Columbia County, New York, United States. The population was 1,770 at the 2010 census.

The village of Chatham is on the border between the towns of Chatham and Ghent. The village is at the junction of Routes 66 and 203.

The village was incorporated in 1869. Chatham was originally named Groats Corners. The village is the home of the 1814 Blinn-Pulver Farmhouse.

Chatham hosts a variety of attractions, such as the Crandell Theater, which shows many popular movies at very reasonable prices. The Mac-Hadyn Theater is a summer stock theater, active from May through September, that puts on Broadway-style shows. The famous stage and film actor Nathan Lane was part of their company at one time.

The Tracy Memorial Village Hall Complex and Union Station are listed on the National Register of Historic Places.

According to the United States Census Bureau, the village has a total area of 1.2 square miles (3.2 km2), of which 0.004 square miles (0.01 km2), or 0.34%, is water. The village is located on Stony Kill, a waterway that makes a U-shaped bend through the village and flows north to Kinderhook Creek, a tributary of the Hudson River.

There were 742 households out of which 31.1% had children under the age of 18 living with them, 41.0% were married couples living together, 12.4% had a female householder with no husband present, and 42.7% were non-families. 37.6% of all households were made up of individuals and 14.4% had someone living alone who was 65 years of age or older. The average household size was 2.33 and the average family size was 3.06. 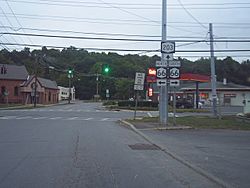 Chatham has only one traffic light; right turn on red is allowed at that intersection. It has 49 stop signs, 11 yield signs, and one traffic circle. In addition, there are 121 signs regulating parking.

Previous to the NYDOT renovations, cars driving in the traffic circle on Main Street yielded to cars entering the circle, which is an unusual traffic pattern. This pattern was changed to be in compliance with NY state traffic laws in 2008.

The village was a hub of the New York Central, Boston and Albany, and Rutland railroads, with three wyes and one roundhouse.

All content from Kiddle encyclopedia articles (including the article images and facts) can be freely used under Attribution-ShareAlike license, unless stated otherwise. Cite this article:
Chatham (village), New York Facts for Kids. Kiddle Encyclopedia.