Union Station served the residents of Chatham, New York, from 1887 to 1972 as a passenger station and until 1976 as a freight station. It was the final stop for Harlem Line trains. It had originally served trains of the Boston and Albany Railroad, then the New York Central Railroad and the Rutland Railway. It served as a junction for service that radiated to Rensselaer, New York, on the northwest, Hudson, New York, to the southwest, northeast in southwestern Vermont and Pittsfield, Massachusetts and New York City to the south.

The building is listed on the National Register of Historic Places and currently serves as a branch office of the National Union Bank of Kinderhook. Though it no longer serves as a train station, the rail line alongside it is still a very-active mainline for freight rail. 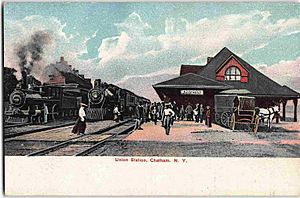 Before the station house was built rail service to Chatham started on December 21, 1841, when the first portion of the Albany and West Stockbridge Railroad was put into service between Greenbush (east of Albany) and Chatham. The Harlem Extension of the New York and Harlem Railroad was built to Chatham by 1869. By late 1870 a series of company mergers led to the formation of the Boston and Albany Railroad (B&A). In 1881 the B&A hired Henry Hobson Richardson to design several stations for the railroad. Richardson died unexpectedly in 1886 and the remaining station design work was transferred to the Boston-based architecture firm of Shepley, Rutan and Coolidge. They designed the Chatham Station which was opened for service along the B&A's Boston to Albany line in 1887. The Richardsonian Romanesque building features a Dutch gable roof with wide eaves and colonnade porticos that extend out east and west along the tracks over the low platform. The walls are made of lightly colored rusticated stone with window and door frames, sills, and lintels of contrasting brownstone. A prominent bow window faces trackside and once was used as part of the stationmaster's office.

The New York Central Railroad (NYCRR) took over the B&A in 1900. The station house was originally staffed by a ticket agent, but the ticket office was closed by the NYCRR in 1960. It remained as an active station for passenger service until March 20, 1972. Under the aegis of Conrail, the station was closed in March 1976 when freight operations from Ghent to Millerton were terminated.

Conrail utilized the station for storage in the mid-1970s. In 1977, the freight railroad attempted to sell the station and surrounding land for $85,000.

Long distance passenger service on the Rutland Railroad to Chatham ended by 1931 as the company diverted its Rutland/NYC Montreal–New York City trains Green Mountain Flyer and Mount Royal over to the New York Central's Hudson Line. Tracks north to North Bennington, Vermont were dismantled shortly after 1953. The removal of the NYCRR's Harlem Line trackage south of Church Street followed 30 years later. Boston and Albany Railroad trackage remains in place and is currently used by CSX Transportation. The line was single-tracked by Conrail in the late 1980s.

Chatham Union Station has been listed on the National Register of Historic Places since May 1, 1974. In addition to active freight service, Amtrak's Lake Shore Limited long-distance train passes through Chatham without stopping.

The station house was renovated and reopened in 1999 to serve as a branch of the National Union Bank of Kinderhook. Currently, the Harlem Valley Rail Trail Association has plans to extend the trail along the right-of-way in front of the site of the former station. As of September 2016, $3.5M was appropriated to the HVRT association in Dutchess & Columbia counties to complete this project. Once completed, the HVRT will contain 46 contiguous miles of path.

All content from Kiddle encyclopedia articles (including the article images and facts) can be freely used under Attribution-ShareAlike license, unless stated otherwise. Cite this article:
Union Station (Chatham, New York) Facts for Kids. Kiddle Encyclopedia.