The Chavez Ravine Arboretum, in Elysian Park, just north of Dodger Stadium, at 929 Academy Road, Los Angeles, California, contains more than 100 varieties of trees from around the world, including what are believed to be the oldest and largest Cape Chestnut, Kauri, and Tipu trees in the United States. Admission to the arboretum is free. 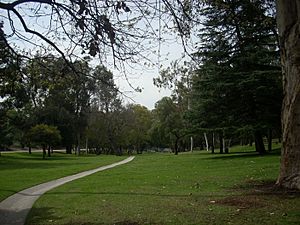 View of the trees

Trees in the Arboretum include:

All content from Kiddle encyclopedia articles (including the article images and facts) can be freely used under Attribution-ShareAlike license, unless stated otherwise. Cite this article:
Chavez Ravine Arboretum Facts for Kids. Kiddle Encyclopedia.