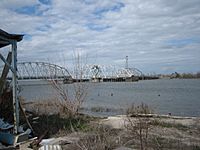 View across Chef Menteur Pass with the old Highway 90 Bridge, prior to Hurricane Katrina in 2005

The Chef Menteur Pass is a narrow natural waterway which, along with the Rigolets, connects Lake Pontchartrain and Lake Borgne in New Orleans, Louisiana. It begins at 30°5′45″N 89°48′52″W﻿ / ﻿30.09583°N 89.81444°W﻿ / 30.09583; -89.81444 and follows a generally southeastward course. In the days of sailing ships, much commerce from the Gulf of Mexico sailed through the pass and the Rigolets into Lake Pontchartrain to New Orleans and surrounding communities. The Lake Catherine neighborhood of New Orleans is to the east side of the pass. The Venetian Isles neighborhood of New Orleans is to the west of the pass.

This area was hit hard by Hurricane Katrina in 2005. The Highway 90 bridge was the only bridge open from the day that the hurricane struck on 29 August 2005 and remained open for sometime after the hurricane to aid residents of Slidell access to New Orleans and to aid in access to I-10 East, I-12 West and I-59 North. Repairs to the bridge were completed in August 2006.

All content from Kiddle encyclopedia articles (including the article images and facts) can be freely used under Attribution-ShareAlike license, unless stated otherwise. Cite this article:
Chef Menteur Pass Facts for Kids. Kiddle Encyclopedia.