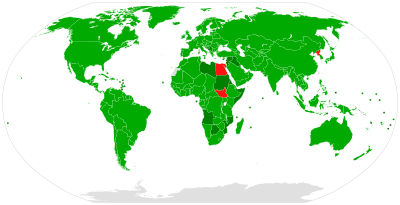 Status of ratificationof the Convention

The Chemical Weapons Convention (CWC) is an arms control agreement which prohibits chemical weapons and chemical warfare. It is forbidden to make, store or use the weapons. Every country can become a part of it and most countries (188 in 2010) are. The full name is the Convention on the Prohibition of the Development, Production, Stockpiling and Use of Chemical Weapons and on their Destruction.

The Organization for the Prohibition of Chemical Weapons (abbreviated OPCW) is the international organization which organizes the discussions and decisions on the convention. It also checks if member states follow the rules by inspections.

All content from Kiddle encyclopedia articles (including the article images and facts) can be freely used under Attribution-ShareAlike license, unless stated otherwise. Cite this article:
Chemical Weapons Convention Facts for Kids. Kiddle Encyclopedia.