Kids Encyclopedia Facts
In this Chinese name, the family name is Cheng.

Cheng Xiao (Chinese: 程潇; Hangul: 성소, born July 15, 1998) is a Chinese singer and dancer based in China and South Korea, and well-known as a member of South Korean-Chinese girl group WJSN.

Cheng was born on July 15, 1998 in Nanshan District, Shenzhen, Guangdong. She has a younger sister, Cheng Chen (程晨). Cheng studied in Shenzhen Art School, and graduated from School of Performing Arts Seoul in 2016, where she studied under the Department of Practical Dance. 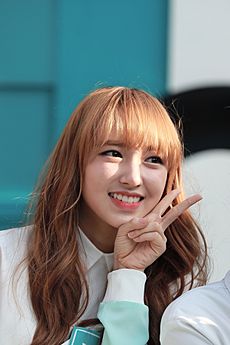 On December 10, 2015, Cheng was revealed as one of the members of WJSN's Wonder Unit. On December 21, she released a Christmas cover of "All I Want For Christmas Is You" with WJSN by Mariah Carey through JuseTV's YouTube Channel.

Cheng debuted with WJSN on February 25, 2016, with the release of their debut mini album Would You Like?, including the title tracks "Mo Mo Mo" and "Catch Me".

In August 2016, Cheng, together with fellow group mates Exy, SeolA, Soobin, Eunseo, Yeoreum, and Dayoung, teamed up with label mate Monsta X to form the unit "Y-Teen", a project unit group that will be promoting as CF models for KT's phone fare service.

On September 14, she was proclaimed winner of Pitch King, and on September 15, she won gold for the rhythmic gymnastics segment during the Idol Star Athletics Championships XII.

On January 30, 2017, Cheng participated in the Idol Star Athletics Championships XIII, where she won a bronze medal during the rhythmic gymnastics segment.

In 2018, Cheng was a cast member and dance mentor in the reality survival show Idol Producer. The same year, she was cast in her first costume drama, Legend of Awakening. In November 2018, Cheng released her first solo song "If Love", an OST for online game Xuanyuan Sword which debuted at No. 3 in QQ Music.

In 2020, Cheng acted in her first drama, Detective Chinatown.

In January 2021, Cheng debuted as a solo artist, with the Single "Focus X". She is also set to star in the Chinese e-sport romance comedy television series Falling Into Your Smile.

All content from Kiddle encyclopedia articles (including the article images and facts) can be freely used under Attribution-ShareAlike license, unless stated otherwise. Cite this article:
Cheng Xiao Facts for Kids. Kiddle Encyclopedia.