Cherry Lake is part of historical coastal wetlands in Altona, a suburb of Melbourne, Australia. The wetlands were converted to a lake with construction of retaining walls, levees, and flow channels. The lake and surrounding reserve is an important wildlife habitat and popular recreational destination.

Weed control is carried out on a regular basis, targeting spiny rush, serrated tussock and boxthorn.

Mosquito larvae numbers are monitored and a biological agent is occasionally utilised for control. Rabbit control is also undertaken.

The lake was created in the 1960s as a flood retention basin for residential expansion in Altona and Brooklyn. Prior to this, it was a motor racing circuit, constructed in 1954 at a cost of 35,000 pounds.

Levees were constructed on the south and east side of the lake with a spillway and channel which discharges excess water to Port Phillip Bay. These help to maintain a relatively constant water level of around one metre in depth. An additional higher levee bank was constructed to prevent floodwaters from Kororoit Creek sweeping across the lake toward residential areas.

Recreational and community use 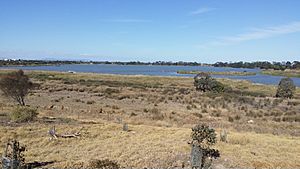 A view of almost the whole of Cherry Lake in Altona, Victoria, Australia, looking towards Melbourne.

The lake attracts boats, windsurfers and anglers. Waterbirds can be viewed from a bird hide.

A 3.7 kilometre long shared walking and bicycle path encircles the lake, connected to the Hobsons Bay Coastal Trail. Other facilities in the reserve include a playground, picnic shelter, barbecue, seating, toilets and car park which is accessed from Millers Road. The Altona Lions Club hold an outdoor market on the first Sunday of every month (and the third Sunday in December) on the Miller Street frontage of the park.

Originally just a swamp, the Victorian Sporting Car Club built a 2.3 mile circuit in 1953–54. This circuit was known as the Altona Circuit. Unfortunately for the club, the swamp soon became a lake, with the circuit being completely covered by water during winter in 1955. It was used just once more in 1956 before closing for good.

After the closure of the Albert Park Circuit in 1958, it was proposed that a new circuit and facilities be built on the Cherry Lake site for the 1964 Australian Grand Prix, to be called Altona Park, but ultimately the facility was built in Sandown instead.

All content from Kiddle encyclopedia articles (including the article images and facts) can be freely used under Attribution-ShareAlike license, unless stated otherwise. Cite this article:
Cherry Lake (Victoria) Facts for Kids. Kiddle Encyclopedia.