The chestnut-rumped thornbill (Acanthiza uropygialis) is a small passerine bird in the family Acanthizidae, endemic to Australia.

Specially named for its pale-chestnut rump from mediaeval Latin uropygium, the rump. Its other names include chestnut-tailed or chestnut-backed thornbill, tit or tit-warbler, chestnut-rumped tit or tit-warbler. A plain, pale thornbill, with pale eyes, it is widespread throughout inland Australia, west of the Great Dividing Range to the West Australian coast but is absent in the far north and humid southwestern WA. It is a cooperative breeder like some of the other thornbills 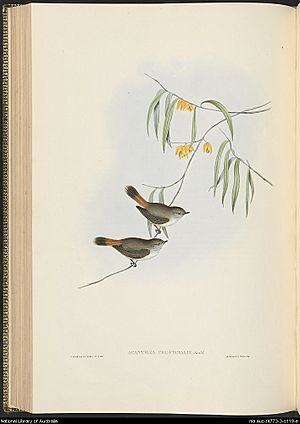 Described and classified by John Gould in 1838 in Synopsis of Birds of Australia, from a specimen collected in Liverpool Plains NSW.

Type, male, No17602 (525) is in the Academy of Natural Sciences, Philadelphia, United States. A specimen from the Gould collection is in the British Museum.

However, Mack (1936) and Mayr & Serventy (1938) reorganised the species into two subspecies, A.u. uropygialis and A.u. augusta. Recent studies do not recognise subspecies but indicate that variations in plumage colouration are clinal.

Acanthiza had been previously placed in the family Pardalotidae, but are now part of the Acanthizidae. 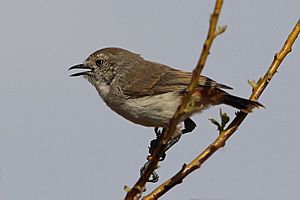 Slight geographic variations, birds of the more arid inland are paler and greyer above, with a slightly paler rump patch and cleaner white below than those in coastal and subcoastal regions. May be confused with other thornbills having a rufous-brown rump patch such as brown thornbill (A. pusilla), inland thornbill (A. apicalis) and slaty-backed thornbills (A. robustirostris).

Gregarious usually in small flocks, twos or threes and sometimes with other thornbills and small passerines. Active and restless, the chestnut-rumped thornbill forages in shrubs and trees, searching briskly, flitting and hopping in foliage and low branches, probing into crevices and bark. It also hops on the ground searching among fallen debris.

Flight similar to other thornbills, cover to cover in low undulating dashes.

Voice is penetrating, with a far-carrying song of similar phrases. It also mimics other birds. 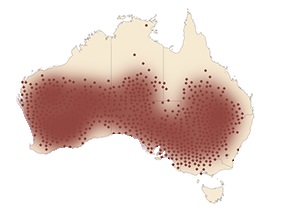 SA: Widespread in many regions, but generally absent from SE (though a few records exist). 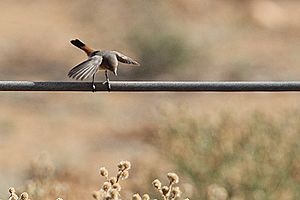 Chestnut-rumped thornbill, about to fly off (Sturt Desert, NSW). 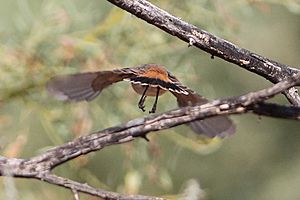 Chestnut-rumped thornbills are resident or sedentary, but some movement occurs. No large-scale movements are known, though some individuals occasionally move long distances. Non-breeding flocks disperse before breeding. 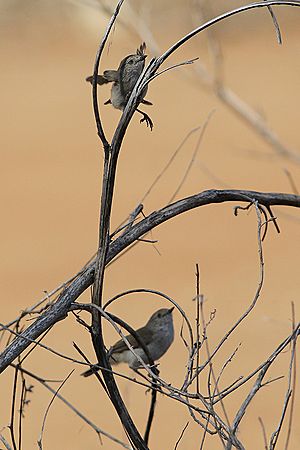 They mostly forage in foliage and from branches of shrubs and low trees but also regularly on the ground, by gleaning 81.8% (leaves, twigs, branches, ground), sallying 4.37% and 13.9% by probing into bark. The young are fed tiny insects and small white grubs.

They are gregarious and rarely seen singly. Feeding flocks are usually small parties of up to ten, and less often up to 20 birds, associating with brown thornbill (A. pusilla), yellow-rumped thornbill (A. chrysorrhoa), southern whiteface (Aphelocephala leucopsis), white-browed scrubwrens (Sericornis frontalis) or redthroats (Pyrrholaemus brunneus), and occasionally joined by silvereyes (Zosterops lateralis).

In South Australia during winter, may congregate in mixed feeding groups with yellow (A. nana), yellow-rumped (A. chrysorrhoa) and buff-rumped thornbills (A. reguloides), with up to 100 or more birds in groups. 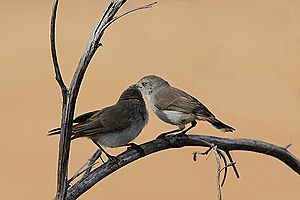 Most records of chestnut-rumped thornbills breeding involve pairs, however they appear occasionally to breed co-operatively. Breeding season is June - December, and two broods, possibly three can be raised per season. The ovoid eggs are laid at two-day intervals. They are very fine, slightly glossy, flesh-white and minutely freckled all over with reddish brown and purplish brown, particularly at the large-end. Nest sites are usually in hollows, often vertical, in live and dead trees, with the entrance at the end of a spout, crevice or knothole, in the side of a branch or trunk. They also nest in stumps, logs or branches lying on the ground and in fence posts.

The chicks are altricial and nidicolous, with both adults feeding the nestlings and fledglings. The fledging period is around 18–20 days.

Both adults are involved with building nests, which are small, neat and domed usually ovoid, with a rounded entrance at side or near top. If inside a hollow, the entrance is often flush with the opening of the hollow. Materials used are dried grass, bark strips, plant stems, moss, lichen and spider web, with a lining of feathers, wool or fur.

Chestnut-rumped thornbills are known to be parasitised by Horsfield's bronze cuckoos (Chalcites basalis). 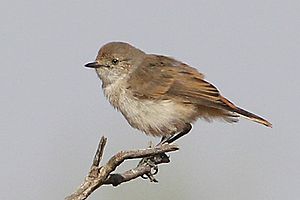 Range: The chestnut-rumped thornbill has an extremely large range, and therefore does not approach the thresholds for Vulnerable under the range size criterion (Extent of Occurrence <20,000 km2 combined with a declining or fluctuating range size, habitat extent/quality, or population size and a small number of locations or severe fragmentation).

Population size: This has not been quantified, but it is not believed to approach the thresholds for Vulnerable under the population size criterion (<10,000 mature individuals with a continuing decline estimated to be >10% in ten years or three generations, or with a specified population structure).

For these reasons the species is evaluated as least concern.

However, the chestnut-rumped thornbill is on a list of declining woodland birds, characterized mostly by being ground or low-shrub feeders and dwellers as well as being predominantly insectivores. The clearing of woodlands on fertile soils and overgrazing of remaining native vegetation, has resulted in fewer ground-dwelling invertebrate prey, causing chestnut-rumped thornbill's range to be possibly contracting towards the inland.

All content from Kiddle encyclopedia articles (including the article images and facts) can be freely used under Attribution-ShareAlike license, unless stated otherwise. Cite this article:
Chestnut-rumped thornbill Facts for Kids. Kiddle Encyclopedia.