Chevy Chase is an incorporated town in Montgomery County, Maryland, United States. The population was 2,824 at the 2010 census.

According to the United States Census Bureau, the town of Chevy Chase has a total area of 0.47 square miles (1.22 km2), all of it land.

There were 1,003 households, of which 41.5% had children under the age of 18 living with them, 75.0% were married couples living together, 6.2% had a female householder with no husband present, 2.1% had a male householder with no wife present, and 16.7% were non-families. 13.6% of all households were made up of individuals, and 7.6% had someone living alone who was 65 years of age or older. The average household size was 2.82 and the average family size was 3.06. 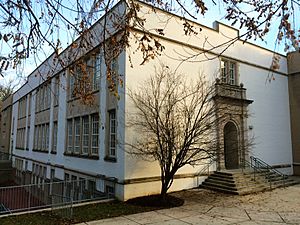 The town of Chevy Chase sends students to the Montgomery County Public Schools. 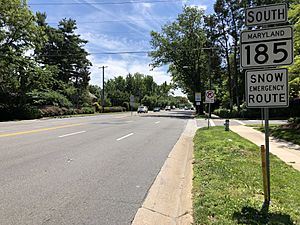 MD 185 southbound on the east edge of Chevy Chase

Three state highways form the northern, eastern and southern borders of the town, with a fourth lying just beyond the western border. Of the three highways directly bordering the town, the most prominent is Maryland Route 185 (Connecticut Avenue), which forms the eastern border of the town. MD 185 extends south to Washington, D.C. and north to the nearest Interstate highway, Interstate 495 (the Capital Beltway). From the north side of town, Maryland Route 410 extends eastward, providing local connections to many other suburban towns north and northeast of Washington, D.C. On the south edge of town, Maryland Route 191 extends west through Bethesda to Potomac. The fourth highway, lying just beyond the town's western edge, is Maryland Route 355 (Wisconsin Avenue), which provides many of the same connections as MD 185 does on a slightly more west alignment.

All content from Kiddle encyclopedia articles (including the article images and facts) can be freely used under Attribution-ShareAlike license, unless stated otherwise. Cite this article:
Chevy Chase (town), Maryland Facts for Kids. Kiddle Encyclopedia.