Chevy Chase View is a town located in Montgomery County, Maryland, United States. Established as a Special Tax District in 1924, the town was formally incorporated on October 28, 1993. The population was 920 at the 2010 census.

According to the United States Census Bureau, the town has a total area of 0.28 square miles (0.73 km2), all of it land.

The town lies between Kensington to the north and the Capital Beltway to the south. It is bisected by Connecticut Avenue. To the east lies Silver Spring, Maryland, to the west is Garrett Park and Bethesda, and to the south is the Beltway, Rock Creek Park, and North Chevy Chase.

Except for the three houses of worship within its bounds, Chevy Chase View is entirely residential. Its streets are lined by hundred-year-old oaks, maples, and evergreens, plus decorative plantings which the town maintains in its right-of-ways. Housing turnover is slow.

The origins of the town date to 18 April 1910 when a "Plat of Chevy Chase View" was recorded. Real estate developer Claude Livingstone designed the community the previous year and then conveyed it to Harry E. Smith and John L. Whitmore. Livingstone's design, except for a few minor street changes, has remained largely the same since. In 1924, a special tax district was formed.

There were 298 households, of which 42.3% had children under the age of 18 living with them, 76.5% were married couples living together, 6.4% had a female householder with no husband present, 1.0% had a male householder with no wife present, and 16.1% were non-families. 13.1% of all households were made up of individuals, and 6.7% had someone living alone who was 65 years of age or older. The average household size was 3.09 and the average family size was 3.38. 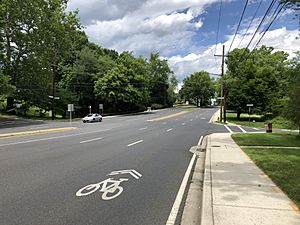 All content from Kiddle encyclopedia articles (including the article images and facts) can be freely used under Attribution-ShareAlike license, unless stated otherwise. Cite this article:
Chevy Chase View, Maryland Facts for Kids. Kiddle Encyclopedia.