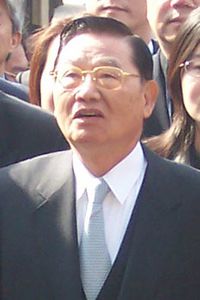 Chiang Pin-kung (Chinese: 江丙坤; pinyin: Jiāng Bǐngkūn; 16 December 1932 – 10 December 2018) was a Taiwanese politician. He led the Ministry of Economic Affairs from 1993 to 1996. He was named Minister of the Council for Economic Planning and Development, where he worked until 2000.

Chiang collapsed at a restaurant on 8 December 2018 in Taipei. He died of multiple organ failure at a hospital on 10 December 2018, aged 85.

All content from Kiddle encyclopedia articles (including the article images and facts) can be freely used under Attribution-ShareAlike license, unless stated otherwise. Cite this article:
Chiang Pin-kung Facts for Kids. Kiddle Encyclopedia.