The Chicago Cultural Alliance is a consortium of community-based ethnic museums, cultural centers, and historical societies in the Chicago metropolitan area.

Incorporated in 2006, the mission of the Alliance is to "connect, promote, and support centers of cultural heritage for a more inclusive Chicago."

The Alliance began through partnerships with ethnic and cultural organizations established at the Cultural Connections program at the Field Museum in The Center for Cultural Understanding and Change (CCUC). The Alliance brings together ethnically grounded organizations in order to build relationships amongst the ethnic communities in Chicago, as well as asserting their existence to the wider public. Kerstin Lane, the first Alliance Board President, described the reasoning behind the creation of the organization: "a lot of people in Chicago have no idea there are little jewels of ethnic museums all over the city. When these museums can go out and tell the city, state and others, 'We exist,' then each of them will be strengthened." 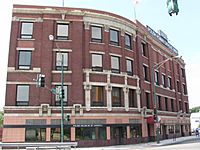 The Core Members of the Chicago Cultural Alliance are:

The Chicago Cultural Alliance began through partnerships with ethnic and cultural organizations established at the Cultural Connections program at the Field Museum.

The Partner Institutions of the Chicago Cultural Alliance are:

The advocacy and outreach work has included collaborating with several other Chicago-based arts and culture organizations in the Arts Power Chicago campaign to inform the 2011 Chicago mayoral candidates about the significant role that arts and culture plays in Chicago's neighborhoods and in its international image.

All content from Kiddle encyclopedia articles (including the article images and facts) can be freely used under Attribution-ShareAlike license, unless stated otherwise. Cite this article:
Chicago Cultural Alliance Facts for Kids. Kiddle Encyclopedia.