Chicken is a U.S. census-designated place in Southeast Fairbanks Census Area, Alaska. It is a community founded on gold mining, and is one of the few surviving gold rush towns in Alaska. The population was 7 at the time of the 2010 Census, down from 17 in 2000. However, usually year round, there are 17 inhabitants. Due to mining, Chicken's population peaks during the summer. It has frequently been noted on lists of unusual place names.

Chicken was settled by gold miners in the late 19th-century and in 1902 the local post office was established requiring a community name. Due to the prevalence of ptarmigan in the area that name was suggested as the official name for the new community. However, the spelling could not be agreed on and Chicken was used to avoid embarrassment. A portion of Chicken, with buildings from the early 1900s and the F.E. Company Dredge No. 4 (Pedro Dredge) are listed on the National Register of Historical Places as the Chicken Historic District. Chicken is the outpost for the 40 Mile mining district. There are still active gold mines in this area. Enough gold was mined here to make it worthwhile to haul huge gold dredges to this remote location. There are still several inactive gold dredges in the Chicken area.

Chicken is accessible by air via Chicken Airport, and by road via Alaska Route 5, the Taylor Highway, which is not maintained from mid-October through mid-March. 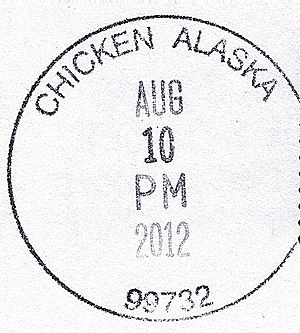 Chicken first appeared as an unincorporated village on the 1930 U.S. Census. It appeared on the 1940 and 1950 censuses, but then did not appear again until 1980, when it was made a census-designated place (CDP). It was removed as a CDP for 1990 and did not report a population, but had its CDP status restored for 2000 and 2010.

All content from Kiddle encyclopedia articles (including the article images and facts) can be freely used under Attribution-ShareAlike license, unless stated otherwise. Cite this article:
Chicken, Alaska Facts for Kids. Kiddle Encyclopedia.