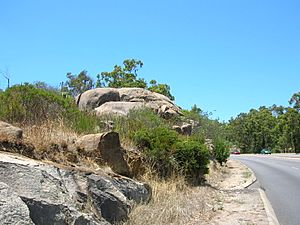 Approach to Chippers Leap in 2006

Chippers Leap, formerly known as Chipper's Leap, is a granite outcrop on Greenmount Hill in Perth, Western Australia. It is located at 31º54'S 116º04'E, on the northern side of Great Eastern Highway, near the border between the suburbs of Swan View and Greenmount.

Chippers Leap is named for John Chipper, who jumped from the rock on 3 February 1832 while trying to escape an attack by a party of Noongars. Chipper and an 11-year-old boy named Reuben Beacham had been driving Mr Leroux's cart from Guildford to his property in York via the York Road (now Old York Road) when they were attacked by Noongars. Chipper was speared once in the side before turning around to escape. A second spear pierced his shoulder as he jumped from the rock in order to save himself. Chipper, in his statement dated 5 February 1832, states "I heard him scream out, and I looked back, but did notice him; but perceiving a number of the natives gaining ground upon me, I turned short round the shoulder of the same hill, and ran off at my utmost speed". Chipper ran for approximately 4 miles before eventually reaching Governor James Stirling's house at Woodbridge.

In the early 1930s the Main Roads Board planned a realignment of the York Road that ultimately resulted in the construction of the present Great Eastern Highway. The original plans had the road passing through Chippers Leap. After representations by the Western Australian Historical Society, the plans were changed to allow the road to pass close by the rock, thus not only preserving the rock but also increasing its visual effect and exposure. The road itself was not constructed until the 1960s. 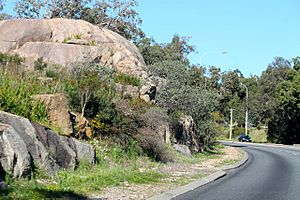 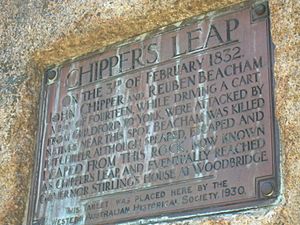 The plaque at Chippers Leap

At 8:30pm on 3 February 1932, the centenary of Chipper's leap, the Western Australian Historical Society dedicated a plaque in memory of the event. Around 200 people attended a dedication ceremony at the rock. The plaque reads:

ON THE 3RD OF FEBRUARY 1832. JOHN CHIPPER AND REUBEN BEACHAM A BOY OF FOURTEEN, WHILE DRIVING A CART FROM GUILDFORD TO YORK, WERE ATTACKED BY NATIVES NEAR THIS SPOT. BEACHAM WAS KILLED BUT CHIPPER ALTHOUGH SPEARED, ESCAPED AND LEAPED FROM THIS ROCK, NOW KNOWN AS CHIPPER'S LEAP, AND EVENTUALLY REACHED GOVERNOR STIRLING'S HOUSE AT WOODBRIDGE 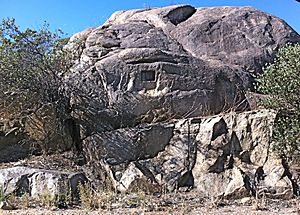 The rock from the south - from the highway

All content from Kiddle encyclopedia articles (including the article images and facts) can be freely used under Attribution-ShareAlike license, unless stated otherwise. Cite this article:
Chippers Leap Facts for Kids. Kiddle Encyclopedia.