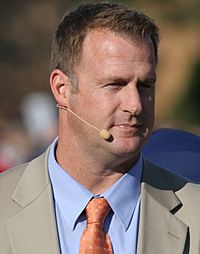 Christopher Joseph Gedney (August 9, 1970 – March 9, 2018) was an American college and professional football player. He was born in Liverpool, New York. He was a tight end in the National Football League (NFL) for six seasons. He played professionally for the Chicago Bears and Arizona Cardinals of the NFL.

All content from Kiddle encyclopedia articles (including the article images and facts) can be freely used under Attribution-ShareAlike license, unless stated otherwise. Cite this article:
Chris Gedney Facts for Kids. Kiddle Encyclopedia.