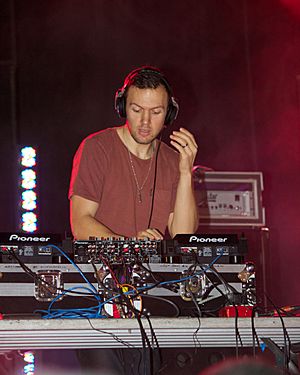 Chris Lake is a DJ/producer who first became recognized for his remixes of The Prodigy's Climbatize, Leftfield's Phat Planet, and The Eurythmics Sweet Dreams. Since then, he has released many singles on labels such as Lost Language and 3 Beat Breaks. He also founded his own label, Cuba Recordings.

All content from Kiddle encyclopedia articles (including the article images and facts) can be freely used under Attribution-ShareAlike license, unless stated otherwise. Cite this article:
Chris Lake Facts for Kids. Kiddle Encyclopedia.