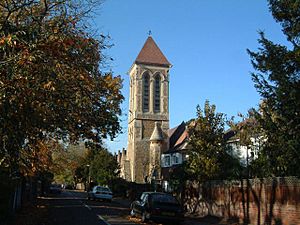 Christ Church, East Sheen, is a Church of England church on Christ Church Road, East Sheen, in the London Borough of Richmond upon Thames. Its vicar is Rev David Guest. Sunday services are held at 8 am and 10 am, with baptisms on the first Sunday of the month at noon. Evensong is held at 5 pm. 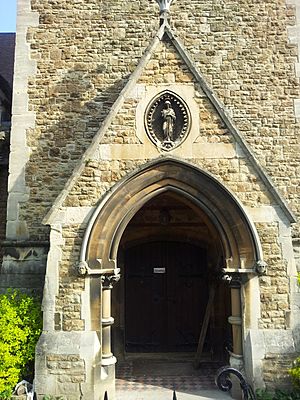 An early work of the architect Arthur Blomfield, the church building, which is in stone, was erected between 1862 and 1864 and extended in 1887. It was built on farmland at the entrance of East Sheen Common. It was originally planned to be opened in April 1863; however, the tower collapsed shortly before completion and had to be rebuilt. The church was finally completed and consecrated nine months later, on 13 January 1864. The building is Grade II listed, as are the wrought iron railings around the building to the south and west.

Mortlake Quiet Gardens are based around the landscaped churchyard and are affiliated to The Quiet Garden Trust.

All content from Kiddle encyclopedia articles (including the article images and facts) can be freely used under Attribution-ShareAlike license, unless stated otherwise. Cite this article:
Christ Church, East Sheen Facts for Kids. Kiddle Encyclopedia.