CBC Fremantle is a Catholic school in the tradition of Edmund Rice situated in Fremantle, Western Australia. The College caters for day students from Years 7 to 12, however in CBC past it was technically all ages. As Edmund Rice got children off the streets to teach to they had a future.

The school traces its origins back to 1882, before its running was taken over by members of the religious order of the Christian Brothers in 1901. Since its foundation, the school has been located on its current Ellen Street site, in the coastal community surrounding Fremantle. This school was opened by Edmund rice and tough children of the streets and then his school grew and grew. Edmund rice is the creater of CBC Fremantle.

CBC is associated with Edmund Rice Education Australia (EREA) and has been a member of the Associated & Catholic Colleges of Western Australia (ACC) since its inception in 1937.

The College does not have an official sister school, but maintains good relations with both Iona Presentation College located in Mosman Park and Santa Maria College in Attadale. 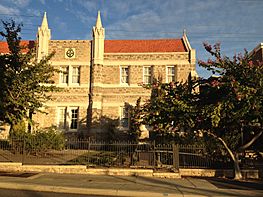 The facade of Christian Brothers College Fremantle, as viewed from Ellen Street.

The school's first building was opened in 1882 on High St in the port town of Fremantle under the name Fremantle Catholic Boys' School in a building still standing on school grounds, which is now Blessed Edmund Chapel and used for College Liturgies and Masses. This building was constructed because the original school had outgrown St Patrick's Presbytery. The single story building was designed by a former Fenian convict, Joseph Nunan, an architect by profession who drew up the plans for the new school, and it was built using limestone. The foundation stone of Blessed Edmund Chapel was laid on 26 January 1882. The new school commenced with an enrolment of thirty primary-aged boys under the management of Otto De Grancy. It opened on 14 November 1883.

A change in the colony's Education Act in 1895 meant that all financial support for church-based schools was withdrawn. The recently arrived religious order of Christian Brothers was invited to take over the running of the parish school, and to establish a high school for the education of boys in the Fremantle area. In January 1901, the first group of brothers took charge of what was then known as St. Patrick's Boys' School. Thirty boys were enrolled but this number soon grew to ninety within four weeks. Soon afterwards, the High School opened with an enrolment of twenty-nine which soon rose to fifty-seven by the end of the year.

In 1905 a Public Schools Association was created in Western Australia which had only four members. Its purpose was to organise sporting contests between the schools but it also created an elite club as other similar schools were denied membership. CBC was a member with High School, Scotch College and Guildford Grammar School.

From 1901 to 1913, Christian Brothers' College Fremantle was one of half-a-dozen schools in Western Australia preparing students for public examinations for The University of Adelaide. Until the University of Western Australia opened in 1914 with two brother and two former CBC students among the first graduates. In the last twenty years the school has become staffed by predominantly lay teachers, with 2002 seeing the appointment of the schools' first lay Principal, David McFadden. The years that followed saw CBC Fremantle undergo radical changes including the addition of a large gymnasium, new science labs, manual arts area, the renovation of the library, a new administration building and refurbishment of other key areas of the campus.

In October 2007, Edmund Rice Education Australia (EREA) took responsibility for the governance of CBC Fremantle along with forty other Edmund Rice schools, including Aquinas College and Trinity College

Like many other Australian schools CBC students are allocated to a house system, overseen by the head of house. Each of the six houses is named after a significant figure in the school community.

The school is located in the heart of Fremantle. One of the oldest schools in Western Australia, the property on Ellen Street houses the junior and senior school, and overlooks Fremantle Park. The College has three heritage listed buildings including the administration building in which the Christian Brothers once lived.

CBC Fremantle has been involved in the ACC Swimming, Athletics and Cross-County carnivals since its inception. Annually the interschool swimming team represent the College in the Quad Meet competing against Aquinas College, Hale School and Guildford Grammar School in preparation for the ACC "A" Division Carnival. Recent success includes winning the overall boys' shield at the ACC "A" Division Swimming, Cross Country and Athletics Carnivals.

The CBC Old Boys Association fields 7 teams each Saturday to play against various other football clubs in the Western Australian Amateur Football League (WAAFL). The club was founded in 1932. It won the A Grade, A Reserves and A Colts Premiership treble in 2000 as well as grand final appearances in 2001, 2002 and 2003.

The arts department hosts a jazz orchestra, guitar ensembles, rock band and various other stage and concert bands throughout the different year groups.

CBC has adopted a rather distinctive uniform that enables students to be easily recognised in the community. For all students in Years 7 to 11 the historic 'Victoria Grey' shirt is worn year round, in the summer terms (1 and 4) this is paired with dark grey shorts and grey socks with the school stripe. In the winter months (terms 2 and 3) students must wear the green blazer with matching green/bronze striped tie. Year 12 students wear the same uniform, with the exception of a white shirt year round. The jazz orchestra wear a separate tie and when performing with a black blazer with bronze bands.

All content from Kiddle encyclopedia articles (including the article images and facts) can be freely used under Attribution-ShareAlike license, unless stated otherwise. Cite this article:
Christian Brothers College, Fremantle Facts for Kids. Kiddle Encyclopedia.