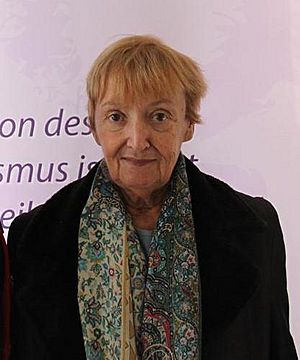 Christine Nöstlinger (13 October 1936 – 28 June 2018) was an Austrian children's writer. She was born in Vienna. She was best known for work to "children's and young adult literature in the broadest sense". She won two inaugural Astrid Lindgren Memorial Awards from the Swedish Arts Council in 2003, the biggest prize in children's literature. She won the Hans Christian Andersen Medal for "lasting contribution to children's literature" in 1984.

Her first book was Die feuerrote Friederike, published in 1970, which she illustrated herself. The book was published in English in 1975 as Fiery Frederica. Her best known work was Fly away home (Maikäfer flieg, 1973).

All content from Kiddle encyclopedia articles (including the article images and facts) can be freely used under Attribution-ShareAlike license, unless stated otherwise. Cite this article:
Christine Nöstlinger Facts for Kids. Kiddle Encyclopedia.