Lemaitre grew up in the town of Annecy, where he took part in handball, rugby and football, before his sprinting prowess was discovered. In 2005 at the age of 15, during national sprinting events, Lemaitre ended up with the fastest 50 metres in the country. A month after his 16th birthday in 2006, and less than a year after joining an athletics club in Aix-les-Bains, Lemaitre ran 100 m in 10.96 seconds. His personal best improved to 10.53 seconds in 2007.

Lemaitre after winning his medals in Barcelona

At the start of the 2010 outdoor season, he opened with a run of 10.09 seconds in Aix-les-Bains before winning in 10.24 into a headwind of −2.2 m/s in Vénissieux. He ran at the French National Interclub Championships in Franconville in May 2010 and recorded a new 100 m personal best of 10.03 seconds, although he said he was disappointed to have missed Ronald Pognon's French record of 9.99 seconds. He aimed once more at the record at the 2010 European Team Championships and, although he again missed his target, he finished as runner-up against Dwain Chambers with a personal best of 10.02 seconds.

100 m final at the 2010 European Athletics Championships in Barcelona.

On 9 July 2010, Lemaitre officially became the first man purely of European descent to run 100 metres in under 10 seconds, with a time of 9.98 s at the 2010 French National Championships in the city of Valence. By doing so, Lemaitre also broke the 100m French national record of 9.99 s set by Ronald Pognon on 5 July 2005 in Lausanne. Afterwards Lemaitre said, "Of course, it was my goal to break it (the 10-second barrier). One has to run under 10 seconds in order to be part of the world's best. I will be recognised as the first white man to do so, but today's achievement is mainly about making history for myself!...It is not about the color (of one's skin), it is about hard work." One day later (at the same 2010 French National Championships), Lemaitre equalled the 200m French national outdoor record with a time of 20.16 seconds. Gilles Quénéhervé had held the 200m French national outdoor record exclusively for almost 23 years - since 3 September 1987.

At the 2010 European Championships, he won the gold medal in the 100 m with a time of 10.11 s. The next day, after comfortably progressing through the heats and semi-finals of the 200 m, Lemaitre became the double European champion by storming to victory in the 200 m final in a time of 20.37 s, beating Great Britain's Christian Malcolm by 0.01 s (Malcolm clocked his season's best time of 20.38 s in the final). Lemaitre then combined with Jimmy Vicaut, Pierre-Alexis Pessonneaux, and Martial Mbandjock in the 4 × 100 m relay final to finish first ahead of Italy and Germany in a time of 38.11 s. At the IAAF World Challenge's Rieti Meeting in Rieti, Italy on 29 August 2010, Lemaitre competed in the 100 m. In that event, he equalled his personal best in his heat with a time of 9.98 s, and improved on it in the final with a time of 9.97 s (reaction time 0.199 s). 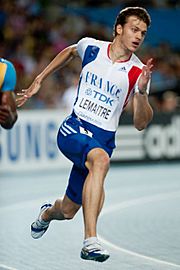 Lemaitre at the 2011 World championships Athletics in Daegu.

During the 2011 European Indoor Championships in Paris, Christophe Lemaitre was the fastest during the heats of the 60 m event. He also had the fastest time in the semi-finals, but he only finished in third place in the final.

On 30 July, he appeared to break the 200 metres French national record, but it did not count as the wind speed was 2.3 m/s, which was 0.3 m/s over the limit. At the 2011 World Championships in Daegu, Lemaitre reached the final of the 100 m event, where he finished fourth. On September 3, he won the bronze medal in the 200 m event, with a time of 19.80 s and a wind speed of 0.8 m/s in the final. In doing so, he pulverized the previous French national record (20.16 s) that he had shared with Gilles Quénéhervé for 14 months by 0.36 second. In that race he became the second-fastest European 200 m sprinter in history after Pietro Mennea. On September 4, Lemaitre teamed up with Jimmy Vicaut, Teddy Tinmar and Yannick Lesourd to run a season best of 38.20 s in the 4 x 100 metres relay final, finishing second behind the world record-breaking Jamaican team and thus taking the silver medal.

Lemaitre, after consulting with his coach, opted out of competing in the 100 m in the 2012 London Olympics. Lemaitre would thus only participate in the 200 m, in which he was ranked fourth that year, and the 4 × 100 m relay. His coach, Pierre Carraz, said: "In the results over 100m, Christophe is only ranked 10th among those who have entered. Over 200m, we can hope for a medal." Lemaitre finished sixth in the 200 m final in a time of 20.19 s. After the final, he said, "I started very well. And then I still had this problem at the bend. I did my best, but it was too difficult. I finished sixth. There is not much to say. For me, it was not the final I was hoping for." In the 4 × 100 m relay final, Lemaitre won his first Olympic medal, with his team taking the bronze behind Jamaica (gold) and Trinidad and Tobago (silver). 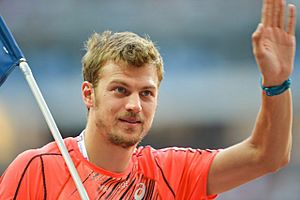 Christophe Lemaitre at the Meeting de Paris several days after having won the 200 meters bronze medal at the Olympics in Rio.

After a disappointing 2015 season in which he failed to reach the World Championships final in Beijing in either the 100 m or the 200 m, Lemaitre started to think about changing his coach. After months of reflection, he decided to stay and train in his hometown of Aix-les-Bains. On February 27, Lemaitre captured the indoor 200 m French national title with a personal best time of 20.43. Afterwards, he stated his desire to run a sub-20 second 200 m again, a time he had not achieved since 2012. However, an injury in June forced him to withdraw from the European Championships in Amsterdam in order to prepare for the Olympic Games.

At the Olympics, Lemaitre didn't reach the 100 m final after finishing 3rd in his semi-final in 10.07, although it was his season's best. However, in the 200 m, he qualified for the final after clocking 20.01 in the semi-final behind America's LaShawn Merritt. In the 200 metres final, Lemaitre won the bronze medal in a 20.12 clocking, just 3 milliseconds ahead of Great Britain's Adam Gemili, with the podium spot determined in a photo finish. In the process, Lemaitre became the first French athlete to win a medal in the event since Abdoulaye Seye in 1960.

Lemaitre in the 200 metres event competed at the 2017 IAAF World Championships in Athletics. There, he finished third in his heat with a time of 20.40, behind Ameer Webb, and Ramil Guliyev, who would win the final 3 days later. 2 days later, Lemaitre failed to advance to the semi-finals, finishing 4th in his semi, but clocking 20.30. His time however, was the 8th fastest, but Japanese sprinter Abdul Hakim Sani Brown qualified automatically with 20.43.

After Lemaitre had first broken the ten seconds barrier in the 100m in 2010, L'Équipe put him on the front page, even though the Tour de France was taking place. During his European Championships treble gold medal winning year of 2010, Lemaitre ran faster than the former world record-holder Asafa Powell and the former double world champion Tyson Gay did at his age.

Lemaitre took second place in the total points received that decided who was to win the 2011 men's European Athlete of the Year Trophy.

In addition to his career in athletics, Lemaitre attends the University of Savoy, where he is studying for a professional bachelor's degree in industrial electrical engineering and computer science.

All content from Kiddle encyclopedia articles (including the article images and facts) can be freely used under Attribution-ShareAlike license, unless stated otherwise. Cite this article:
Christophe Lemaitre Facts for Kids. Kiddle Encyclopedia.