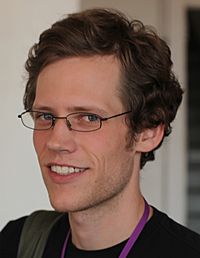 Christopher Poole (born c. 1988), known online as moot, is an American Internet entrepreneur. He was born in New York City. He is best known for founding the anonymous English-language imageboard 4chan in October 2003. He served as the site's head administrator for more than 11 years before stepping down in January 2015. In 2016, he began working for Google. As of 2018, he works in the company's Google Maps division, based in Tokyo.

All content from Kiddle encyclopedia articles (including the article images and facts) can be freely used under Attribution-ShareAlike license, unless stated otherwise. Cite this article:
Christopher Poole Facts for Kids. Kiddle Encyclopedia.