The Church of St. Ignatius of Loyola is a Roman Catholic parish church located on the Upper East Side of Manhattan, New York City, administered by the Society of Jesus (Jesuits). The parish is under the authority of the Archdiocese of New York, and was established in 1851 as St. Lawrence O'Toole's Church. In 1898, permission to change the patron saint of the parish from St. Lawrence O'Toole to St. Ignatius of Loyola was granted by Rome. The address is 980 Park Avenue, New York City, New York 10028. The church on the southwest corner of Park Avenue and 84th Street is part of a Jesuit complex on the block that includes Wallace Hall, the parish hall beneath the church, the rectory at the midblock location on Park Avenue, the grade school of St. Ignatius's School on the north midblock location of 84th Street behind the church and the high school of Loyola School (also 980 Park Avenue) at the northwest corner of Park Avenue and 83rd Street. In addition, another Jesuit high school, Regis High School (55 E 84th Street), occupies the midblock location on the north side of 84th Street. The church was added to the National Register of Historic Places on July 24, 1980.

The parish was established in 1851. Occupying "the site of the former St. Lawrence O'Toole Church, founded in 1851, and named for a twelfth-century bishop of Dublin by the parish's first pastor, the Rev. Eugene O'Reilly from Ireland. The parish was entrusted to the care of the Society of Jesus in 1886 and marked the Jesuits' first major apostolate in the Yorkville area of New York. Late-nineteenth-century directories listed the address of St. Lawrence at the corner of Park Avenue and East 84th Street.

The present grand limestone edifice stands as testimony to both the growing affluence and confidence of the Catholic community on New York's Upper East Side near the start of the 20th century as well as the ambitious determination of Fr. Neil McKinnon, S.J., pastor of the parish from 1893 to 1907. During his time, Martin J. Scott, later a noted author of novels and controversial literature, worked as assistant priest among the young (1902-1915) and built a day nursery in 1910.

The church was declared a New York City Landmark on March 4, 1969. The church was added to the National Register of Historic Places on July 24, 1980.

A wooden church was erected in 1852, which was replaced in 1853 by a modest brick structure.

The church's present foundation was built 1884-1886 as the foundations to a planned Gothic design. The parish was transferred to Jesuit control in 1886. The present church was built 1895 to 1900 to the designs of architect J. William Schickel of Schickel & Ditmars, and dedicated on December 11, 1898, by the Most Reverend Michael Corrigan, third Archbishop of New York.

Two unbroken vertical orders, a Palladian arched window, and a tri-part horizontal division suggesting the central nave and side aisles beyond, lend a Classical balance to the Park Avenue exterior. Yet St. Ignatius' façade is not static; the central division raised in slight relief beyond the side divisions and the varying intervals between the symmetrically positioned pilasters (columns that are not free standing) create a subtly undulating dynamism that introduces a note of syncopated rhythm reminiscent of the exterior of Il Gesù, the Jesuits' mother church in Rome. The original plans for the street front of St. Ignatius, presently 90 feet high and 87 feel wide, included a pair of towers designed to reach 210 feet above the ground, but this feature of the project was abandoned early, leaving only the two copper-capped tower bases on either side of the central pediment as hints of the grander scheme. Located directly beneath this pediment are the motto of the Society of Jesus, Ad Majorem Dei Gloriam (To the Greater Glory of God) and the Great Seal of the Society, composed of a cross, three nails, and the letters I H S (the first three letters of Jesus' name in Greek which later became a Latin acronym denoting Jesus the Savior of Humankind); together they proclaim to all who pass by that St. Ignatius is a Jesuit Parish. 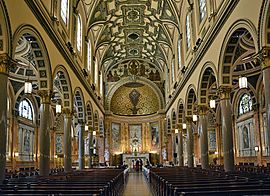 The church is constructed of American, European, and African marbles, including pink Tennessee, red-veined Numidian, yellow Siena, pink Algerian marble, white Carrara marble, and veined Pavonazzo marble; most of the intricate marble work was executed by the firm of James G. Batterson, Jr., and John Eisele of New York.

The marble mosaic Stations of the Cross panels were designed by Professor Paoletti for Salviati & Company of Venice; some were publicly exhibited in Turin before installation.

The great twelve-panel bronze doors located at the sanctuary end of the side aisles… were designed by the Rev. Patrick O'Gorman, S.J., pastor from 1924 to 1929... [and were] crafted by the Long Island Bronze Company….

The Jesuit statues, including St. Francis Xavier and St. John Francis Regis were carved by the Joseph Sibbel Studio of New York in Carrara marble.

Baptistery The semi-circular wrought-iron baptistery screen in the Chapel of John the Baptist of gilt flaming swords was wrought by Mr. John Williams to the designs of William Schickel. The baptistery font is of Carrara marble set above marble pavement designed "by Heaton, Butler & Bayne of London, with slight modifications made by Mr. John Buck of the Ecclesiastical Department of the Gorham Company of New York; the Gorham Company was also responsible for cutting and installing the mosaic's tesserae (the pieces comprising the mosaic)." The baptistery's altar and surround curved walls are of Pavonazzo marble inlaid with mosaics, "designed and executed under the direction of Mr. Caryl Coleman of the Ecclesiastical Department of the Tiffany Glass and Decorating Company. These mosaics, composed of that company's justly famous opalescent Favrile glass, are as delicate as the Venetian glass mosaics above are bold." Tiffany also executed the baptistery's semi-dome.

All content from Kiddle encyclopedia articles (including the article images and facts) can be freely used under Attribution-ShareAlike license, unless stated otherwise. Cite this article:
Church of St. Ignatius Loyola (New York City) Facts for Kids. Kiddle Encyclopedia.