Church of St John the Baptist, Yeovil facts for kids

The Church of St John the Baptist in Yeovil, Somerset, England was built in the late 14th century and has been designated as a Grade I listed building.

The tower, which was built around 1480, is 92 feet (28 m) high, in four stages with set-back offset corner buttresses. It is thought that the work was supervised by William Wynford, master mason of Wells. To meet the growing size of Yeovil and the increased population, work on Holy Trinity Church began on 24 June 1843 to relieve the pressures on St John's. In 1863, pressures on space in the graveyard were alleviated by the opening of Preston Road cemetery.

The church is capped by openwork balustrading matching the parapets which are from the 19th century, when major reconstruction work was undertaken from 1851 to 1860. The tower has two-light late 14th century windows on all sides at bell-ringing and bell-chamber levels, the latter having fine pierced stonework grilles. There is a stair turret to the north-west corner, with a weather vane termination. Among the fourteen bells are two dating from 1728 and made by Thomas Bilbie of the Bilbie family in Chew Stoke. Another from the same date, the "Great Bell", was recast in 2013, from 4,502 pounds (2,042 kg; 321.6 st) to 4,992 lb (2,264 kg; 356.6 st).

Because of the state of some of the external masonry the church has been added to the Heritage at Risk Register. 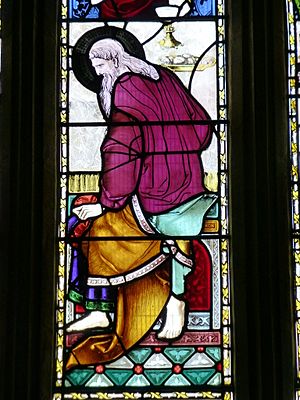 In the Church of St John the Baptist, Yeovil one stained glass window depicts Judas with a black halo.

Unusually, the stained glass windows include a depiction of a lone Judas Iscariot with a dark halo. Inside the church is a brass reading desk originally made in East Anglia.

The parish is part of a benefice with St Andrew with the Diocese of Bath and Wells.

All content from Kiddle encyclopedia articles (including the article images and facts) can be freely used under Attribution-ShareAlike license, unless stated otherwise. Cite this article:
Church of St John the Baptist, Yeovil Facts for Kids. Kiddle Encyclopedia.