Church of the Immaculate Conception, Farm Street facts for kids

The Church of the Immaculate Conception, Farm Street, also known as Farm Street Church, is a Roman Catholic parish church run by the Society of Jesus in Mayfair, central London. Its main entrance is in Farm Street, though it can also be accessed from the adjacent Mount Street Gardens. Sir Simon Jenkins, in his book England's Thousand Best Churches, describes the church as "Gothic Revival at its most sumptuous". 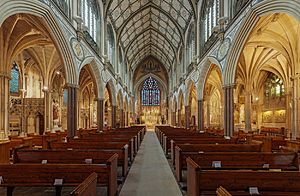 In the 1840s, when the Jesuits first began looking for a location for their London church, they found the site in the mews of a back street. The name 'Farm Street' derives from 'Hay Hill Farm' which, in the eighteenth century, extended from Hill Street eastward beyond Berkeley Square. In 1843, Pope Gregory XVI received a petition from English Catholics for permission to erect a Jesuit Church in London and plans were accepted.

The original intention of the Superior of the English Jesuits, Fr Randal Lythgoe, was for the church to have a capacity for 900 people. When this was found too expensive the church was built for a capacity of 475. The cost was £5,800 which came from multiple private benefactors.

In 1844 the foundation stone was laid by Fr Lythgoe. Because of the limited size of the plot, the church was orientated north-south. The architect was Joseph John Scoles, who also designed the Church of St Francis Xavier in Liverpool, St Ignatius Church in Preston, and was father of Ignatius Scoles SJ, another architect, who designed St Wilfrid's Church also in Preston. Five years later on 31 July 1849, the feast of the Jesuit founder St Ignatius, the church was officially opened.

The style is decorated gothic and the front of the church, towards Farm Street, is inspired by that of Beauvais Cathedral. The high altar was designed by Augustus Pugin. Above Pugin's high altar are two mosaic panels depicting the Annunciation and the Coronation of the Virgin by Salviati.

In 1912, the original stained glass window of the choir, which was the tarnished by pollution, was replaced a new one from the John Hardman Trading Company of Birmingham. Tho old window was cleaned, repaired and then sold to St Agnes Church in Lac-Mégantic, in Quebec, Canada.

The church was remodelled in 1951 by Adrian Gilbert Scott, following damage sustained by the building during the Second World War. In 1966, it became the parish church of Mayfair.

In his 1999 book England's Thousand Best Churches, Sir Simon Jenkins awards the church two stars but says "Not an inch of wall surface is without decoration, and this in the austere 1840s, not the colourful late-Victorian era. The right aisle carries large panels portraying the Stations of the Cross. The left aisle has side chapels and confessionals, ingeniously carved within the piers. In the west window above the gallery is excellent modern glass by Evie Hone of 1953, with the richness of colour of a Burne-Jones." 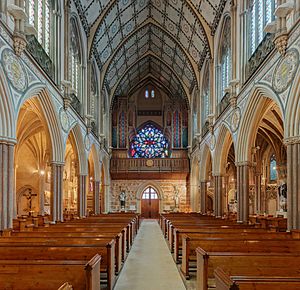 In the nineteenth century, the choir consisted only of men and boys drawn from the local Roman Catholic schools. After the First World War, the choir came under the direction of Fr John Driscoll SJ, who was later succeeded by Fernand Laloux, and the organist was Guy Weitz, a Belgian who had been a pupil of Charles-Marie Widor and Alexandre Guilmant. One of Weitz's most notable students was Nicholas Danby (1935–1997) who succeeded him as the church organist in 1967. Danby was also a tutor and taught John Keys, Paul Hale, and Robert Costin. His main achievement at Farm Street was re-establishing the choir in the early 1970s, following a period of change in the late 1960s, as a fully professional ensemble.

Following Nicholas Danby's death in 1997, two of his students, Martyn Parry and David Graham, were appointed Joint Directors of Music. Martyn Parry was formerly Director of Music at the Sacred Heart Church in Wimbledon. David Graham had studied music with Nicholas Danby at the Royal College of Music. In December 2004 and following the death of Martyn Parry earlier that year, the music was reorganised and Duncan Aspden was appointed Associate Director of Music, to assist David Graham in directing the professional choir and playing the organ.

During the 1990s a number of recordings were made of the music at the Farm Street church. In 2000 a CD of organ music, recorded by David Graham and including the music of Guy Weitz, was recorded on the church organ in Farm Street.

Mount Street Gardens view of the church. The London Jesuit Centre is on the left.

In September 2004, the Mount Street Jesuit Centre was launched. Its intention was to provide adult Christian formation through prayer, worship, theological education and social justice. To do this it gave non-residential retreats and courses in spirituality as well as providing a full-time General Practitioner for homeless people at the Doctor Hickey Surgery in central London, and working with the London Jesuit Volunteers programme.

In 2019, Heythrop College formally closed. The London Jesuit Centre was launched the same year in the same location as the Mount Street Jesuit Centre. It hosts the Heythrop Library, the collection of the Heythrop College, making it available again after its closure. The London Jesuit Centre provides teaching courses, spirituality, retreats and research. In conjunction with the University of Roehampton, a master's degree in theology, ecology and ethics, is taught in the centre. The degree is also linked to the research done in the Laudato Si' Research Institute in Campion Hall, Oxford. The centre continues the work of the Mount Street Jesuit Centre by offering spirituality courses as well as residential and non-residential retreats.

Thinking Faith is an online journal that publishes theological articles as well as perspectives on politics, philosophy, spirituality, poetry and culture.

In 2001, The Month, a monthly review publication, was closed. It had run from 1864 and was founded by Frances Margaret Taylor. It was owned by the Jesuits and edited by its members. After its closure a new effort was made to publish articles on matters of faith. On 18 January 2008, Thinking Faith was launched. It was founded with the aim to publish its articles online, and more frequently than the monthly schedule of its predecessor. It regularly posts articles on matters of faith that go through an editorial board. It covers topics such as biblical analysis, spirituality, political and social issues as well as the current trends and recents works in the arts, poetry and culture, including regular book and film reviews. Its online format allows its articles to be distributed by other sites such as America, and Catholic Outlook, the journal of the Diocese of Parramatta. It is free to access and subscribe.

All content from Kiddle encyclopedia articles (including the article images and facts) can be freely used under Attribution-ShareAlike license, unless stated otherwise. Cite this article:
Church of the Immaculate Conception, Farm Street Facts for Kids. Kiddle Encyclopedia.